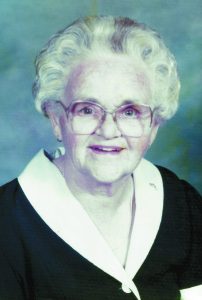 Velva Mary Larter, 99, passed away in the early morning hours on Sept. 30, 2022, at Kittson Memorial Healthcare Facilities, where she was a resident in the nursing home. She had been confined to assisted living and the nursing home for nearly 10 years because of deteriorating physical and mental health issues, and recently contracted COVID infection.
Velva Fick was born on April 4, 1923, in McKinley Township east of Lancaster and was the youngest daughter of Albert and Martha (Kuball) Fick. She was raised by her parents on the family farm. She attended rural north McKinley School through the eighth grade and ended her education at that point as the nearest high school was 15 miles away. With no school buses available, further education meant leaving home to board out in the town of Lancaster and family finances simply could not accommodate that expense. Unfortunately, multiple tragedies struck the Fick household early in Velva’s life. Father Albert died of a ruptured appendix when Velva was only about 5 years old. This left the family dependent on a single mother to support them on minimal resources. When Velva was about 12, her mother suddenly died of an undiagnosed internal hemorrhage. This left the family in the custody of a recently acquired stepfather. The continued existence of Velva and her sister and two brothers was very challenging psychologically, physically, financially and socially. Velva met her future husband, George “Bud” Larter, and they married in 1939 and set up a household at the Fick farm where Velva had been born and she had been raised. This marriage resulted in four children, Roland (Jane) of Hallock, Minn., Beverly of Fargo, N.D., Robert (Jane) of Glencoe, Minn., and James of Las Vegas, Nev. The couple resided all of their lives in McKinley Township where they prospered and developed a respectable farming operation from much hard work.
Velva was a very good homemaker and provided her family with delicious meals of plenty. She was an excellent cook and meals were a joy. Velva preserved enormous amounts of vegetables and fruits for winter. A favorite pastime was picking all kinds of wild berries for sauce, jams and jellies. She knew where every berry patch of a dozen different berries that grew in the township and made sure they got harvested. One summer she preserved over 50 quarts of wild strawberry sauce.
Velva was a very accomplished embroidery artist and she made many beautiful pieces of varying sizes and designs, and gifted those to many friends and family members. Later in life, Velva realized she had been denied any higher education. She also had watched and encouraged several children to obtain university degrees. She set out to remedy this inequity and set out to take an adult education course through the Lancaster School and she was awarded a GED certificate making her the equivalent of a high school graduate. This occurred when she was about 60 years old and she was quite proud of this achievement.
Velva is survived by her four children and spouses as above; her beloved grandchildren, Daniel and Kari, Christopher, Jennifer and Roberta, and Megan. She also leaves great-grandchildren, Solveig and Ambrose (Bud), Svea and Saga, Ashleen and Duncan, Sydney and Sam, and Leah.
Velva was preceded in death by her parents, Albert and Martha Fick; four brothers and sisters in infancy (less than 1 month); sister, Violet Klemetson, Seattle, Wash., Victor Fick, Lancaster, and Lawrence Fick, Park Rapids, Minn. She also lost her husband, Bud, after 46 years of marriage in 1986. Velva lost a grandson, Jason in a boating accident in 1987.
Memorial services will be held at Sion Lutheran Church in Lancaster where Velva was a longtime member. Services are scheduled for Tuesday, Oct. 4, 2022, at 11 a.m. with visitation for one hour prior to the service. Interment will be in Riverview Memorial Gardens, Lancaster.
The family suggest memorials designated to Sion Lutheran Church Ladies or Kittson Memorial Healthcare Facilities. Rest in peace, dear soul.
Austin Funeral Chapel, Hallock, was in charge of the arrangements. www. austinfuneralchapel.com.