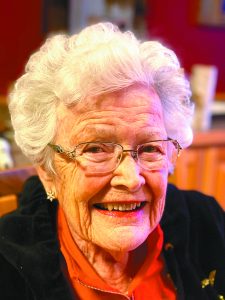 Warm, friendly and gracious, Marlys Anderson (nee Engelstad) died on Friday, Nov. 25, 2022, at the Kittson County Nursing Home in Hallock, Minn., at the age of 97.
Raised in Hallock, Marlys graduated from Hallock High School in 1943. On her 21st birthday in 1946, she married Kennard Anderson and moved with him to his family grain farm east of Kennedy, Minn., where they lived until 2005. On the farm, they raised three sons: James, Wayne and Douglas. Education was important to Marlys, and she guided her boys so each received degrees from University of Minnesota in Duluth.
Because of her support of education, Marlys became actively involved with PTA, and was a regional vice president of Minnesota PTA serving several counties in northwest Minnesota on the state PTA board of directors. Also active in politics, she was a delegate to political conventions and a fundraiser for her party.
Her church was also very important to her and she was active in ladies’ groups and serving teams, Bible study and church choir at Kennedy Covenant in Kennedy.
An avid knitter, Marlys would watch TV with her family while knitting sweaters, mittens, shawls. Her entire family, young and old, all wore sweaters knitted by her. She knitted for nephews and nieces, grandkids and great-grandkids.
She always had a big vegetable garden and loved her flower gardens as well. Energetic and hardworking, after her sons left home, she continued to mow and maintain over 4 acres of lawn until 2005 when she and Kennard moved from the farm. Marlys had six grandchildren and 11 great-grandchildren with whom she traveled, played games and talked. She entertained her entire family for holidays, preparing turkeys, hams, baking bread and cookies as well as Norwegian treats such as lefse and krumkakke.
When her sons married, she got the daughters she hoped for and welcomed Joan, Pam and Lois into her home and life enthusiastically. With six grandchildren, she was always up for Scrabble, King’s Corner or any game the kids would share with her. Marlys drove her car until four years ago, and would drive herself to Minneapolis, Little Falls, Minn., and Fargo, N.D., to visit her family.
Always young at heart, Marlys became friends with many friends that her sons and wives would bring to visit. A special thank you to the wonderful folks at Red River Valley Hospice for the love and support provided to Marlys in her last days.
Left with warm and loving memories are: James and Joan, Doug and Loi, and daughter-in-law Pam; as well as grandkids, great-grandkids, nephews and nieces and in-laws.
Marlys was preceded in death by her husband in 2007; son, Wayne, in 2013;her parents and brother, Calvin.
Services will be held on Saturday, Dec. 10 at 11 a.m. in Kennedy Covenant Church, Kennedy. In lieu of flowers, memorials are suggested to Jupiter Cemetery Association, Kennedy Covenant Church or Kittson Memorial Nursing Home.
Austin Funeral Chapel, Hallock, is in charge of arrangements. www.austinfuneralchapel.com.