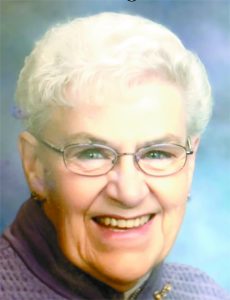 Bonnie Johnson, 94, of Thief River Falls, Minn., formerly of Kennedy, Minn., passed away Jan. 2, 2023.
Bonnie Evangeline Nelson was born Nov. 28, 1928, to Bennie and Evelyn (Hokanson) Nelson in Skane Township west of Kennedy. She was the fourth of 14 children. She was baptized and confirmed at Red River Lutheran Church, attended Kennedy Public School and graduated in 1946. Bonnie was a good student and active in many activities, including cheerleading, class plays and declamation.
In June of 1947 she was married to Alton (Altie) Johnson. They lived on the farm east of Kennedy where they raised six children. Bonnie worked hard as a farmer’s wife and mother, but never complained. She was well-known for her delicious “brown” bread. She was a life-long member of Maria Lutheran Church, was active in the 4-H club in her youth and as an adult leader, and served as treasurer for many years in the V. F. W. Women’s Auxiliary. Later, she worked at the Hartz Store in Kennedy.
She and Altie moved to Kennedy in 1976. Bonnie continued to live in Kennedy until a fall caused a broken leg and she was forced to move into assisted living; first in Stephen and then Thief River Falls. She passed away peacefully at Oakland Park Nursing Home in Thief River Falls.
She is survived by: sons, Neil (Kim) Johnson of Kennedy; Terry Johnson (Cindy) of Battle Lake, Minn.; Dave (Deb) Johnson of Moorhead, Minn.; Bill (Kris) Johnson of Dilworth, Minn.; and daughter, Carole (Dick) Krogstad of Thief River Falls; sisters, Carol Drake, Jeanette Spilde and Becky Neuberger; and brothers, Paul, Larry and Jim; many nieces and nephews; 12 grandchildren; and 15 great-grandchildren.
She was preceded in death by: her parents; her husband, Alton; and one son, Robert; daughter-in-law, Louise; great-grand-daughter, Unity Skye; as well as three sisters, Corrine (Gunnarson), Hazel (Hansen) and infant Susan; and four brothers, Clare, Floyd, Robert and Wayne.
There will be a celebration of her life in Kennedy the spring of 2023. Memorials are preferred to Maria Lutheran Church, Kittson County Hospice and Kennedy Cemetery Association.
Austin Funeral Chapel, Hallock, is in charge of arrangements. www.austinfuneralchapel.com.