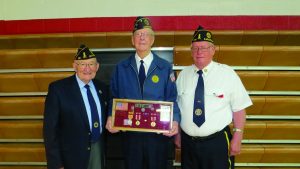 By Linda Andersen
“I volunteered for the service right after my junior year in high school,” states 91-year-old World War II Veteran and long time Hallock resident Tom Hughes.
A resident of Strathcona during his high school years, he attended high school in Greenbush for three years. Signing up for the military seemed to be the thing to do for young men his age, he says. He and a friend, Edwin Erickson, ventured to East Grand Forks to enlist and were assigned to the army. “We were hoping we could go together,” remembers Hughes.
A military record shows significant dates in his military history: Jan. 1, 1945 was his “date of entry into active service.” He departed for the Philippines on Aug. 25, 1945, arriving there Sept. 16, 1945. He returned to the United States Oct. 8, 1946.
At the recent Memorial Day service in Hallock, Robert Cameron presented Hughes with medals from those days of service. Hughes received the Asiatic – Pacific Campaign Medal which is awarded to U.S. Armed Forces members who served within the Asiatic – Pacific Theater between Dec. 7, 1941 and March 2, 1946. He was also presented the Philippine Independence Ribbon which recognizes members of the military who served in Philippine operations during World War II.
He also earned the Army Good Conduct Medal for “exemplary conduct, efficiency, and fidelity.” In addition, he earned the World War II Victory Medal, which is presented to all members of the U.S. military who served in active duty between Dec. 7, 1941 and Dec. 31, 1946.
Hughes and his friend Edwin initially went to Fort Snelling and then, Jefferson Barracks in Missouri, where they were given their army clothing and other supplies.
Unfortunately, after several days in Missouri, Erickson was sent to Texas while Hughes was sent to Fort Knox in Kentucky for 18 weeks of training. Hughes then spent short periods of time in Oregon and California before heading to the Philippines.
He calls the approximately 21-day trip to the Philippines “the worst trip that I’ve ever had in my life.” Eighteen hundred nauseous men on a ship, on rough waters did not make for a pleasant trip.
Although he had been trained as a mortar operator, his first work in the Philippines actually involved truck driving as he transported Filipinos who had been hired by the army. He then worked in the office of the Air Force paying the Filipinos who had been hired by the army.
Of the Filipinos, he says, “They’d had a tough time when the Japanese were there …They were under the Japanese until the U.S. Army got there.”
He says his last few months in an office job were “pretty nice.” He tells of the officer in charge being a pilot and says they would sometimes “fly over the ocean for fun.”
It appears, however, that Hughes doesn’t want to glorify military life. Asked what advice he would give to a young person going into the military, he says, “I don’t like to give advice,” acknowledging that “It can get rough” for those going into the military.”
Hughes mentions that his dad, who served in the military in France during WWI, signed him up for membership in the American Legion and he has maintained membership in that organization for 73 years.
Following his military service, Hughes graduated from the AC at Crookston, NDSU in Fargo, and a mortuary college in Chicago. He eventually bought the funeral homes in Stephen, Drayton, and Hallock and has lived in Hallock since 1968.
At 91, he also knows something of retirement. “I did a lot of golfing after I retired. I golfed “til I was 85,” he says. He also enjoys hunting and fishing.
Family is an important part of Tom’s life. He married Beverly Wollertson at Shelly – Marsh River Lutheran Church on June 26, 1955. They had two children. Doug, an attorney, was killed in a car accident near Roseau in 1990. Jane married Blake Sobolik and presented the Hughes with three grandchildren, Stacy (Ben Diamond), Brett (Molly), and Maia (Colin Beger). The Hughes have five great-grandchildren, Douglas and Caroline Diamond and Nora, Blake, and Josie Sobolik.
Tom Hughes – a long life of service to family, community, and country.