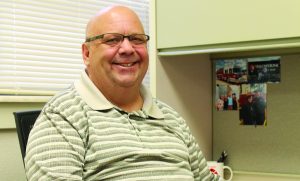 ­­­­­By Linda Andersen
“The whole focus is the safety of our community and county,” said Scot Olson, new emergency management officer and environmental services director for Kittson County.
He said his new position is a “natural progression” from his previous occupation as a captain with the St. Cloud Fire Department and he brings to this new work a good bit of relevant education and work experience.
Olson grew up in the state of Washington where his father was an engineer with Boeing. Following high school, he began studies at Central Washington Uni-versity with the intent of becoming a teacher. Not fully committed to that course of study, however, he interrupted his college career and joined the Air Force where he worked as a medical technician at John Moses Hospital, a joint Air Force and veteran’s hospital in Minot, N.D.
Following his time in the military, he returned to Central Washington Uni-versity where he completed a bachelor’s degree in administrative office management in 1988 and secured a position as customer service representative with Grays Harbor Paper.
“I had gotten the bug to be a firefighter when I was in Minot,” he said, explaining that he had been a volunteer firefighter while living in that city. That “bug” didn’t leave him, and in 1992 he acquired a position with the fire department at Union Gap, Wash. During that period, he earned an associate’s degree in fire command administration from Yakima Valley College.
He began a 21 year period of service with the St. Cloud Fire Department in 1997. He said the department responded to six thousand calls a year. Asked if he had any stories to share from those twenty-one years, he responded, “You see and remember the good things.”
“I was the pump operator at one of the big fires in St. Cloud – I never ran out of water,” he added.
He said his work included a lot of “medical stuff,” including dealing with heroine overdose incidents.
“I got interested in emergency management at St. Cloud,” Olson said, mentioning that he got to know emergency managers through his work.
He has earned a Basic Emergency Manager’s Cert-ificate through the state of Minnesota and is currently pursuing a graduate certificate in emergency management by taking online courses through Crown College in St. Bonifacious, Minn.
“I’ve always liked Northern Minnesota. I’ve had my fill of the Metro,” he said, indicating a satisfaction with being in this part of the country.
Being in a town with a hockey program makes him happy, too. “I absolutely love hockey. I was a Winnipeg Jets fan before I moved up here.”
“I enjoy trains,” he said and added that he’ll probably do some walking and golfing in Hallock.
Family is also important to Olson. He spoke of his four children – Amy, Jessica, Kyle, and Kasey – who range in age from 21 to 30. He’s learned of the joys and struggles of raising a developmentally disabled child as his oldest daughter suffers from joubert syndrome.
A girlfriend (Linda), currently of St. Cloud, and her children are also a part of Olson’s life.
Olson began his work in Hallock on April 30 and is “trying to get a handle on everything.” Meeting people in the area is one of his immediate goals. He spoke of plans to meet with his counterparts in Roseau and Marshall Counties and, since “cross border issues” exist, he plans to meet with emergency management personnel in Emerson, Manitoba.
Because keeping tabs on environmental issues is a part of Olson’s job, he plans to spend some time at the MarKit Landfill.
Scot Olson is determined to keep the people of Kittson County “safe and able to recover should we go through a natural or man-made disaster.”