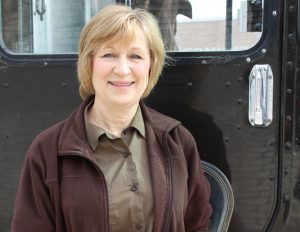 By Linda Andersen
“What I really like is meeting new people and getting to know a little about them … The people in Kittson County have all been so very nice,” responded the pleasant UPS delivery driver, Baryth Halvorson, when asked what she’s most enjoyed about her job.
She’s had an advantage over a few people who might come to your door, say a bill collector or law enforcement officer. Folks are glad to see her. “People are always happy to get a package they’ve ordered,” she commented.
Although she has worked for UPS for over 30 years and is soon to retire, customers may be surprised to learn that UPS has not been her only career. She once attended a mental health technician program at the technical college in Anoka and worked as a mental health technician at the hospital in Thief River Falls for 18 years. For a while she worked part-time at the hospital and part-time for UPS.
Going back even further, she explained that she grew up near Grygla. “I came from a big family,” she said and mentioned that she has five brothers and three sisters. She spent a long time on the road back then, too; at that time no high school existed in Grygla so she attended and graduated from Marshall County Central High School in Newfolden. “We had a long bus ride,” she commented.
“I heard they had good insurance,” she said in response to the question of what drew her to a job with UPS. In her early years with the company, she worked part-time loading trucks, beginning her shift at three or four in the morning. “At Christmas time we would start sometimes at two,” she added.
She then drove routes for employees who were on vacation, followed by a full-time route in the Badger, Roseau, and Wannaska areas, and now has driven the Kittson County route for many years.
Traveling 250-300 miles per day, she begins dropping off packages in Karlstad and goes on to the Lake Bronson, Halma, Caribou, Lancaster, and Orleans areas. A typical work day is about nine and one-half hours.
Commenting on changes in her work over the years, she said the most important changes have to do with technology. “Technology is so amazing,” she said, noting that, among other benefits, it allows customers to track their packages and know exactly when they are coming. It also provides the UPS driver with quick access to addresses and other information. She’s seen changes in the trucks over the years, too. They weren’t automatic and didn’t have power steering when she started. A final change she noted is the increase in rural deliveries over the years.
She said at least 22 trucks deliver out of the Thief River Falls UPS Center every morning and cover the area from Crookston to Roosevelt and from Lengby to Humboldt.
The problems one might expect a UPS driver to encounter – mad dogs, grouchy customers, or getting lost – have not been big problems for Baryth, though she does remember getting a bit turned around in the Union Lake Sarah area by Erskine one time. She did say that icy roads have been her biggest problem.
What job would Baryth have enjoyed if she hadn’t worked for UPS? She said she likes working with young children. “Babysitting my grandchildren would be the ultimate career.”
Baryth and husband, Davin, who reside near Viking, have three children and eight grandchildren (who range in age from one year to 19 years). Their daughter Mandi is married to Ryan Bothum and they are parents of Emma, Kora, and Greta. Daughter Erika is married to Kelly Olson; their children are Arthur, Signe, and Leuis. Son, Bjorn, is married to Allyson Helling and they are the parents of Otto and Ole.
Although she has appreciated her job with UPS, she said she will value having more time to spend with family and friends in retirement. Her last day of delivering packages will be Friday, June 29, 2018.
“I want to say ‘thank you’ to all the people of Kittson County. I really appreciate all the kindness they’ve shown me,” Baryth concluded.
The pleasant, efficient UPS driver will be missed