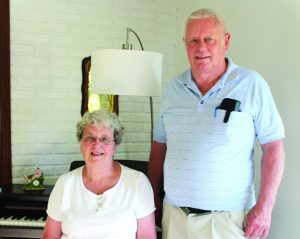 Wayne Jacobson, new veterans service officer for Kittson County is pictured in his Karlstad home with wife, Corienne. Corienne is well-known in the area as a pianist for church functions.      (Enterprise Photo by Linda Andersen)

By Linda Andersen
“I felt I could help the veterans of Kittson County,” said new Kittson County Veterans Service Officer, Wayne Jacobson, in response to the question of why he applied for his new position.
Jacobson began his duties on April 30, 2018 working alongside Bob Cameron, the former veterans service officer in the county, and has been on his own since Cameron’s retirement on June 15th.
Jacobson, a 1964 graduate of Karlstad High School and a veteran himself, spoke first of his military experience. “I was in the army for three years, from ‘65 to ‘68,” he explained.
Jacobson was not drafted, but voluntarily signed up for the army. Back then, you “kind of knew you were going anyway,” he said.
The Army first sent him to Fort Leonard Wood in the Missouri Ozarks where he received training in communications. He was then off to the “swamps of Mississippi” for a month of jungle training.
Next, he traveled for 21 days on a ship that took him to Vietnam. “They put me in supply,” he said of his year long assignment in that country. His official title was material readiness expeditor. “We went to supply depots and would find parts that people were looking for,” he said in further explanation of his duties. Jacobson, who was based at Nha Trang, “traveled all over the country” and was “busy all the time.” He mentioned visiting such Vietnam locations as Tan Son Nhut, Cameron Bay, and Qui Nhon.
Jacobson described Tan Son Nhut as a “big airbase that got bombed frequently.”
Was Jacobson ever afraid being in such a volatile area? “Didn’t have time to be,” he responded.
He said he was able to occasionally visit with a couple of other Northwest-ern Minnesota men he knew, mentioning Keith Britten of Karlstad, who was stationed in Cameron Bay, and the late Merle Stennes of Strandquist, who was stationed in Qui Nhon.
“We went over by ship and flew home,” Jacobson said as he explained that he spent his last year in the army at Fort Lewis in the state of Washington, where his wife Corienne (Anderson) of Strandquist, was able to join him. Wayne and Corienne had married in 1965, just two months before Wayne entered the Army.
Jacobson spoke positively of his experience in the military. “It’s a good experience. It makes you grow up. You see parts of the world that you wouldn’t see otherwise,” he said, adding that, besides Vietnam, he saw Japan, including Okinawa.
“Vietnam is a pretty country,” he said. Though there is “crude living” in the villages, Vietnam has “fabulous cities – as modern as we’ve got over here.” He said French architecture is still evident from France’s rule in the country in the late 1800’s and early 1900’s.
Following his discharge from the military, Jacobson worked in various professions, including managing the Robertson Lumber Company in Stephen, building and selling houses with his father-in-law, and owning Hardware Hank in Karlstad with wife, Corienne. In more recent years, he worked for H & S Manufacturing of Stephen for 26 years and owned the Wayne Jacobson Insurance Agency in Karlstad for 35 years. Of the latter, he said he sold insurance for Hallock Farmers Mutual of Hallock, North Star of Cottonwood, and RAM of Duluth.
Asked what he most enjoyed about his years of employment, he quickly and succinctly responded, “People.” That was also his response to the question of what he likes most about his current job serving veterans. Jacobson will have many opportunities to “get out and see people” as he assists veterans in his office and attends funerals of veterans.
Jacobson benefited in the past from veteran services in the areas of medical care and tuition assistance for schooling and is now happy to help other veterans secure various types of assistance. Though he admitted that a lot of paper work is involved in his new position he said it is “rewarding when you get something (for a veteran) that they deserve that they didn’t have before.”
Wayne Jacobson will be in his office at the Kittson County Courthouse on Mondays from 8 a.m. to 3 p.m. and Tuesdays, Wednesdays, and Thursdays from 8 a.m. until approximately 11 a.m.
To view a list of veteran benefits programs with which Jacobson can provide assistance, view the Veteran Services/Kittson County website.