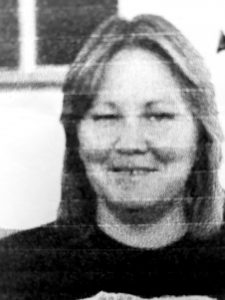 By Margie Holmgren
Kittson County Deputy Sheriff Matt Vig and Sheriff Steve Porter are looking into a 23 year old missing persons case.
In 1995, 41 year old Becky Jo Look went missing from Halma, Minn.
Look was last seen in October of 1995 but wasn’t reported missing until February 1996 by her daughter.
Vig has been looking at the old case file and talking with the deputies who originally worked the case to see if they remember anything that was not in their notes and to get a feel for the case as a whole.
Vig’s notes show Look came to Kittson County in 1995 with Todd Spilde, whom she met in Albuquerque, N.M. They moved to Halma, where Spilde was from.
The couple had a history of drinking and partying and possible domestic violence.
Look ended up with a fractured collar bone/shoulder around August of 1995 and her story – injured herself while herding cows – differed from Spilde’s -falling down when she was drunk.
She was put on hydrocodone as a result of this injury.
Look was good to stay in contact with her family, she had three daughters and her mother. She had talked with friends in the area about moving back to Albuquerque.
Her last call to family was Oct. 1, 1995 when she called her mother and spoke for 41 minutes.
Because of the sporadic behavior of Look, her daughter, Lora, didn’t report her missing until Feb. 26, 1996.
Her other last activity included cashing a check sometime around the same week as the phone call. It was cashed at the Frog Pond and cleared the bank a few days later.
Vig has reached out to many people in the Halma area.
“There was a rumor that she got on a bus and went to Albuquerque,” Vig stated. Unfortunately he can’t find who originated that rumor or find any proof that that is what she did.
“A friend of hers says she never said goodbye to her,” stated Vig and the friend found it strange that she didn’t at least tell her she was leaving.
The friend also stated it wasn’t unlike for her to hitchhike. Look did not have a vehicle so she couldn’t have just driven off.
“Deputies interviewed whomever they could back then but it seemed like maybe she had just gone back home,” added Vig.
The physical property where she was living was never searched.
Vig and Porter feel if she did leave the area and got away safe she would have contacted her family at some point.
“We have some work to do” stated Porter, “but first we want to let the public know we are working on this and ask the public to call us if they have any memory of this woman.”
Similar to the Dawn Carlson case, Porter says we have to look at what is most possible.
Since she has not attempted to contact her family they have to believe she went missing in Kittson County.
Spilde moved on with his life and met Odalys Hanson, better known as Dolly, and they were married in 1997. In 1999 they moved to Florida, divorcing in 2006. Currently they believe Spilde is homeless in Florida and have not been able to reach him.
In the meantime, Vig will continue to look at the case and the sheriff’s office is going to inspect the property where Look last lived in Halma. Unfortunately it includes a large swamp.
The public is asked to contact the sheriff’s office at 218-843-3535 if they have any information about Look. Someone just might have information they don’t realize they have.