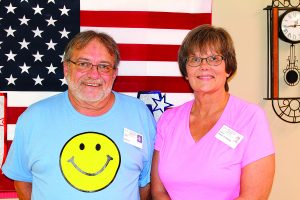 According to Jimann Cozzen, activities director at the Kittson Memorial Healthcare Center, “Activities are the most important part of the nursing home experience.” Her statement is backed by numerous experts in the field of geriatrics who say that such activities reverse depression as they give structure, feelings of accomplishment and purpose to the lives of residents.
A visit to an afternoon session of the activities department in the Lower Level of the Kittson Memorial Nursing Home provided an interesting peek into the people and activities involved in this important department.
Leading this session were activities director Jimann Cozzen and her husband, Eddie Cozzen, an activity aide in the department. Jimann and Eddie, along with activity aide Becky Lenhart work full-time in the department. Part-time employees are Felicia Blanco, Joanna Cole, Peggy Gjovik, Cora Kujava, Becky Lehrke, Lynn Mattson, Krista Olson, and Madi Olson. Jimann reported that another activities department event was simultaneously occurring in the Upper Level of the home.
What do Jimann and Eddie enjoy most about their work in the department?      “Definitely the people – they’ve become our family,” responded Jimann.
“The people – they’re my moms and dads … I tell their children that I’m a new person in the family and they say, ‘No problem,’” said Eddie.
They spoke more about the residents. Jimann mentioned that out of 52 residents, 22 are age 90 and above. She added that many of the 90 and over group come out every day to participate in activities.
“We have at our disposal hundreds of years of stories,” commented Eddie, adding that residents have been through the depression and the wars of the last many years.
Asked about their personal histories and histories with the healthcare center, Jimann revealed that she is from Lake Bronson, the daughter of the late Jim and Betty Ann Shablow, and a 1975 graduate of Karlstad High School.
She met Eddie, who was born in Texas, while living in California. They have been married for 28 years and have five children. Their daughter Stephanie once worked with them as an activities aide at the home. She went on to earn her LPN license and will next pursue her RN license.
Employment alongside one’s spouse in the work force is not real common. What do Eddie and Jimann see as the advantages of working side by side? “She can have me do what she wouldn’t have someone else do,” responded Eddie, whose comments often contain a touch of humor.
“We support each other,” responded Jimann, in more serious manner.
Jimann began employment as an activity aide in the dementia unit of the nursing home in 2003. In approximately 2011, when activities director Janna Davis quit, Jimann assumed her position. Eddie came on board around the same time.
Jimann said she has become much more proficient in the use of the computer since beginning the director position as she must come up with a care plan for each resident that she puts into the computer.
During the activities session this particular afternoon most residents worked on a stained glass activity while at least one resident colored a felt picture.
It was obvious that conversation and socialization are part of the activity time. In the process of the conversation on that afternoon, Jimann and resident Marjorie Johnson discovered they are related. Upon Jimann’s mentioning that Agnes Shablow was her grandmother, resident Marjorie stated, “Agnes Shablow was my mother’s cousin.”
And, the ties to Agnes Shablow didn’t end there. “I lived with Agnes when my house burned down,” reported resident Anna Stromgren.
The group talked, too, about recent activities they have enjoyed at the home. Jimann spoke of Jody Kirkeide coming to entertain the residents. “They had a wonderful time,” she said, mentioning that residents enthusiastically sang along.
“We have balloon tosses once in a while,” reported Marjorie.
Eileen Totleben expressed her enjoyment with having high school girls come in to model their prom dresses last spring. She described a trip they had taken to the museum in Pembina as “fantastic,”
Lois Pankratz said she especially enjoys the musical groups that come in on Fridays. The WoodPicks and Popple Ridge Pickers are a couple of groups that have entertained at the home.
Eddie Cozzen probably best summed up the experience of participating in the activities department events with these words, “We have so much fun it shouldn’t even be legal half the time!” 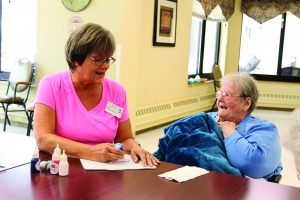 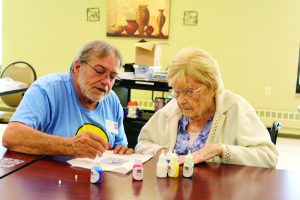