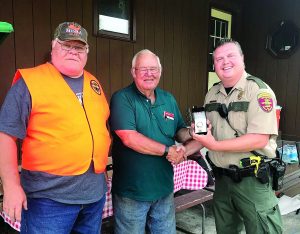 By Linda Andersen
“I was recently honored to give recognition to Gary Johnson, Humboldt, for his 50 years of service as a volunteer Minnesota Youth Firearms Safety instructor. He was certified as an instructor in May of 1968 and has taught numerous students on the safe handling of firearms, game regulations, and hunter ethics,” stated Jeremy Woinarowicz, conservation officer for the Minnesota Department of Natural Resources (MnDNR).
Woinarowicz went on to say, “Dedicated volunteer instructors like Johnson are instrumental in keeping the youth of Minnesota safe when hunting and handling firearms.”
A telephone interview with Johnson revealed a man who is enthusiastic about hunting and teaching firearms safety. Asked what he enjoys about teaching, he initially responded, “That’s a five hour question.” He went on to give the succinct reply – “I enjoy working with the young people and people who are interested in the outdoors.”
He added that he incorporates “preservation and handling of resources and wildlife” into his classes.
He said he tells his students that they become a reflection of him. “How they act is representing me as a sportsman.”
Students in his classes are being taught by a professional; Johnson was a school teacher, having taught business and math at the public school in Humboldt for nine years.
Johnson has taught firearms safety for so long that he is now teaching the grandchildren of his first students. He noted that he’s also taught older adults, including a man in his 90’s. He used to also teach firearms safety in North Dakota.
He mentioned that Minnesota law requires that persons born after Dec. 31 and who are 12 years of age or older are required to possess a Minnesota Firearms Safety Certificate if they wish to purchase a hunting license in the state.
He believes hunting to be a relatively safe sport, saying it is “one of the safest sports possible, safer than basketball.”
Hunting is a family affair for Johnson. “My father and grandfather and great-grandfather were sportsmen,” he said.
Johnson has promoted the sport in following generations. He said that, though his wife was not a hunter before their marriage, she became one afterwards. “If they marry into the family they have to become hunters,” he quipped. Mentioning that he has seven children, he stated, “Every one of my kids has shot their own deer and dressed it.”
One of his sons, Justin Johnson, serves as a guide for geese and duck hunters at Lake of the Woods on weekends.
What does Johnson enjoy about hunting? “I enjoy being outside and the camaraderie,” he stated, noting that he has also hunted in Montana and “slept in tents with frost on my hair.”
It appears that Johnson will not be retiring from teaching firearms safety or hunting any time soon. “Just finished up three students the other day,” he said.
“We’re building stands rights now,” he stated of his latest hunting activity, noting that he hunts grouse, bear, and deer in Kittson County. “Now it’s time for observing the wildlife,” he added.
The phone conversation with Johnson concluded with his revealing that he was currently involved in another voluntary activity -that of babysitting grandchildren.