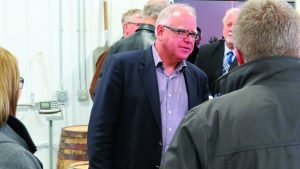 GOVERNOR-ELECT TIM WALZ made a stop in Kittson County on Saturday, Dec. 1. Pictured above, he visited with several of the approximately 50 attendees during the event, held at Far North Spirits south of Hallock.
(Enterprise photo by Anna Jauhola)

By Anna Jauhola
Approximately 50 people gathered Saturday, Dec. 1 at Far North Spirits outside Hallock to listen to and ask questions of Minnesota Governor-elect Tim Walz, DFL.
The event was scheduled as a part of Walz’s One Minnesota Listening Tour. He stopped in Kittson County after his stop in Crookston earlier in the day.
Walz touched on major issues affecting not only the entire state, but the whole of Kittson County, including healthcare, education, agriculture and the economy.
When asked how he will help extreme rural counties, such as Kittson, he said, “As a partner. The best solutions for here will come from here.”
He added that his tour is meant to encourage as many people to get involved as possible, to make their voices heard, and empower agencies to be partners with communities.
Walz, who has a background in education as a civics teacher, will take over Gov. Mark Dayton’s office in January.
He is the first governor in 100 years to have a teaching background.
He is currently serving as U.S. Representative for Minnesota’s District 1 in Congress.
He said during the event that he recognizes his voters want him and the Legislature to get things done together.
Kay Rosengren, Hallock, said the state government’s primary goal should be to work together.
“Nothing happens unless you get some cohesion,” she said.
Walz agreed, noting her advice is wise, and that he will work to find a common ground to move the state forward.
“Lasting solutions are the ones where we come together, pick out the best pieces of each, reach a compromise and move something forward,” he told the crowd. “Business owners are looking for certainty in what they can do. Our schools need certainty in funding.”
Continued on page 4
Kathy Johnson, of Hallock, noted that Kittson County is considered frontier status and cannot be lumped in with other rural counties because it is so far removed from the rest of the state. She mentioned an employee in the Social Service department who will likely quit because she isn’t reimbursed for mileage, which can be over 100 miles.
Walz said it’s his job to relay that kind of situation to the Legislature to ensure adjustments or changes to funding formulas to make up for the county’s remoteness.
He noted that healthcare is a basic human right, complex and needs to improve, but will require compromise. He said part of the solution is to focus on the front-end prevention side of things. He said it needs to be affordable and accessible.
“We’re going to have to be creative,” he said.
When talking about affordable housing, Walz said he’s heard about the issue across the state. Many schools and cities say they can’t fill positions because there isn’t adequate housing available.
This and others are issues of livability, he said. Having little to no access to broadband, housing, daycare, critical access healthcare and other amenities is a major issue in greater Minnesota, and is a quality of life issue.
“I look forward to working with you on all of this,” he said.
He noted that during his term as governor, education funding will not all be based on property taxes, which means some tax dollars from the Twin Cities will help rural areas like Kittson County.
“We also want to make sure that education is appealing enough to attract good teachers out here,” he said.
Kittson County is largely driven by an agriculture-based economy. Walz noted that agriculture is the backbone of many communities. He encouraged the crowd to become involved by applying to be on various state commissions, such as the Department of Natural Resources.
He said ag isn’t the only driver, however, and communities need local retailers to provide services.
“We have a lot of young people without much buying power because they’re paying off student loan debt,” he said. “It would be better for them if they can buy locally.”
To learn more about Walz and his agenda as governor, visit www.walzforgovernor.org or call at (507) 722-0312. He is also on Facebook @WalzforGovernor.