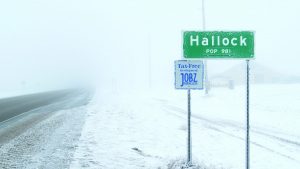 ABOVE, the population sign south of Hallock on Highway 75 was outlined in hoarfrost on Wednesday, Dec. 12 while a thick fog hid the town from view. BELOW LEFT, frost covered the Christmas decorations in Hallock, while in the country near Kennedy the trees shown brilliantly white in the morning light. BELOW RIGHT, frost formations on a railing show how hoarfrost can form. 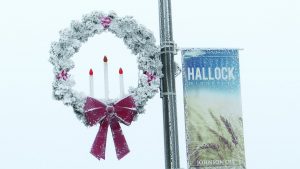 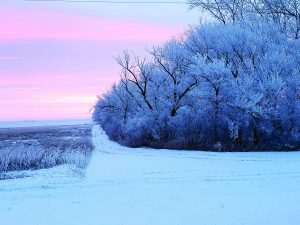 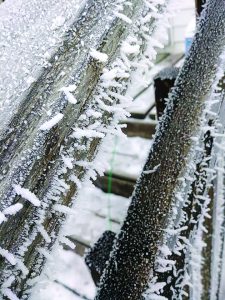 A dense fog obscured the area into early afternoon on Wednesday, Dec. 12.
Travel was slow-going as visibility was down to 800 feet in and around Hallock.
The fog, mixed with 93 to 100 percent humidity and 28-degree temperatures, led to a stunning hoarfrost.
According to the National Weather Service, hoarfrost “forms when air with a dew point below freezing is brought to saturation by cooling.”
The thick frost typically forms on free-standing objects, such as branches, fence and power lines, poles and tall grass.
The hoarfrost covered these types of objects throughout Hallock on Dec. 12, including the Christmas decorations and the poles on which they hang and signs directing traffic.
The fog obscured the city from view through the morning.
Despite the questionable driving conditions, the fog plus hoarfrost made for beautiful scenery throughout the day.