By Anna Jauhola
Crafts have always been a stress-reliever for Tami Boychuk.
Over the last few years, she got wrapped up in diamond painting. And when her daughter announced her impending marriage, Boychuk decided to create a glittering wedding gift.
Diamond painting doesn’t use real diamonds. Instead, each kit is equipped with tiny sparkly plastic chips called drills.
Boychuk, of Hallock, found a website where she could submit her daughter’s engagement photo and have it printed on a diamond painting canvas. She then spent dozens of hours meticulously placing the drills.
When the big day came, Boychuk said her daughter and son-in-law, Madison and Trevor Telkamp, were wowed by the gift.
“The day I picked this up, I was thrilled,” Boychuk said. “The bigger the picture, the more beautiful it is.”
She had the piece framed at Younggren Photography in Hallock and decided to add glass to keep the drills from falling off in the future.
Carley Stenquist, of Lancaster, got into diamond painting about a year ago when she saw a picture of the craft of her Facebook newsfeed.
“It looked interesting, so I ordered one,” Stenquist said.
Her first venture was a smaller, simple pattern of a four-season tree. She ordered the small kit to see if she liked it.
“I loved it right away,” Stenquist said. “It’s a good idea, though, to get a simple one to start with or you’ll get overwhelmed. It’s very time consuming.”
Stenquist got so into her new hobby that she began selling the diamond paintings. She has a booth at Vintage Plus in Lancaster and she sells some online through Facebook.
“My husband asked me what I’m going to do with all these,” Boychuk said, laughing. She doesn’t sell her pieces, but gives them away when she can.
Stenquist also wondered, like Boychuk, whether she could turn a photo into a diamond painting. So she chose her favorite subject, Sunny Boy – her cat – and had a canvas created with a picture of him.
“I was really pleased with how it turned out,” Stenquist said. “I’ll do more of those when I find a subject I like.”
For both women, finding a good technique and process for developing their masterpieces was trial and error, and each gives the same advice.
Don’t just peel off the plastic cover or you’ll lose the stickiness of your canvas surface.
Stenquist typically starts at the bottom right-hand corner of her pieces and works in a small area, peeling away the plastic cover as she goes.
Boychuk has a similar process, but cuts portions of the plastic cover off as she goes.
“Everybody wants to see what they’re going to be doing, but don’t do it,” Boychuk said of completely removing the plastic to see the whole pattern. “And, be careful when you’re starting to peel off the plastic. Sometimes the adhesive will lift.”
Stenquist and Boychuk both also said to organize the drills so they don’t go flying all over. Each drill is about an eighth-inch square and there are hundreds of drills, if not into the thousands for larger canvases.
Boychuk uses small zipper locked bags to hold each color and then she labels each bag with its color code. She also advises to separate the colors by shape. Some kits come with square drills and others come with round drills.
Both women use the tools sent with kits to create their pieces, including a tweezer, a multi-pickup tool, wax and a tray to hold drills. Boychuk uses a lighted magnifying glass to see better.
As diamond painting becomes more popular, there are variety of places from which one can order kits. In the beginning, kits only came from vendors in China.
The best part of the hobby is, although it may be painstaking, it’s fun.
“You don’t have to have creative ability to do it,” Stenquist said. “You just have to be patient and organized.” 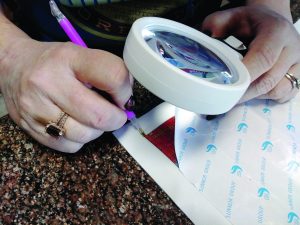 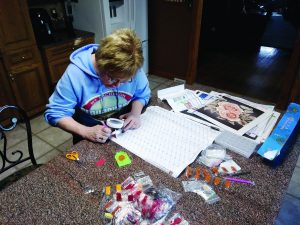