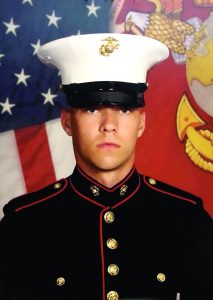 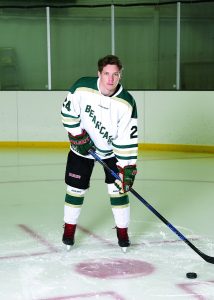 LANCE CPL. RILEY KUZNIA, of Karlstad, died on New Year’s Day after another Marine discharged his service weapon inside the Marine Barracks Washington, D.C. The bullet struck Kuznia and he died from the gunshot wound. Above, left, Kuznia in his U.S. Marine Corps dress uniform. Above, right, Kuznia’s Bearcats hockey portrait from his senior year of high school.

By Anna Jauhola
Riley Kuznia was driven and dedicated. His attitude, in any scenario, showed his commitment whether it be to teammates or fellow Marines.
Lance Cpl. Kuznia, a 2017 graduate of Tri-County School in Karlstad, was tragically killed in an accidental shooting on New Year’s Day. He was stationed as a team leader for Guard company at Marine Barracks Washington D.C. in the heart of the nation’s capital. Kuznia was on guard duty at the time of the shooting, during which a fellow guard fired his service weapon and the bullet struck Kuznia.
He was 20 years old.
The Marine, whose name has not been released, has been placed on administrative duty until the investigation is complete. So far, the Metropolitan Police Department in District of Columbia is treating the incident as a death, not homicide.
Kuznia’s personal decorations from his time of service include the Global War on Terrorism Service Medal and the National Defense Service Medal.
“We are truly saddened by this terrible loss,” said Col. Don Tomich, commanding officer of Marine Barracks. “Riley was a highly driven and goal-oriented Marine whose positive attitude set the example here at the Barracks.”
Kittson County residents are in shock and have sent sympathy to Kuznia’s family through social media and personal communications.
Although Kuznia grew up and had the most impact on his hometown, the Hallock community also felt his quiet influence.
Kuznia loved hockey and traveled to Hallock to play for the Bearcats from eighth grade through the end of high school. Robert Carr, his head coach, remembers Kuznia as a hard worker and a good teammate.
“He was so committed,” Carr said. “He was a quiet leader and just led by example.”
Carr said Kuznia was instrumental in recruiting several Karlstad students to play for the Bearcats.
“He was very close with his fellow classmates,” Carr said. “One of his good friends said to me he was the leader of getting those guys to work and get better at hockey just by putting in the time.”
Carr said Kuznia wasn’t an overly talented hockey player, but that didn’t matter.
“He was more respected by his fellow classmates and teammates because of his dedication,” Carr said. “He would come in and work hard and have a great attitude. That’s the type of impact you’re hoping the young kids are paying attention to.”
Kuznia’s tenacity spilled over into his adult life as the enlisted in the U.S. Marine Corps and rose to the rank of lance corporal and became a team leader in his Guard unit.
He was with his unit for less than a year, and in that short timeframe, he made a lasting impact, said 1st Sgt. Giselle Calliste of Kuznia’s company. She called him extraordinary with unlimited potential.
He was already a team leader when he joined the Guard company in February 2018 and he oversaw five other Marines, Calliste said in a phone interview with the Enterprise.
“He stood out among them to be a leader,” she said. “Due to maturity, character, overall presence.”
Kuznia’s work ethic, passion and willingness to learn were just a few admirable traits as well as taking advice and putting it into action made him a good leader. Many admired Kuznia for taking on as much responsibility for equipment, duty and the lives of fellow Marines as he did in such a short amount of time and at such a young age, Calliste said.
From others in the company, Calliste said she’s heard they admired his ability to be professional when needed, but knowing when it was time to relax and enjoy camaraderie.
“That has been echoed by all the Marines he impacted,” Calliste said. “He stood out amongst his peers. We saw him going further than anyone anticipated.”