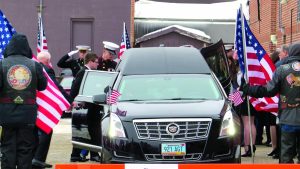 By Anna Jauhola
Midnight rides through the county hunting rabbits and watching the northern lights. Early morning and all-day fishing trips catching whopper northerns and walleyes. These memories and more have helped Markelle Kuznia survive the last weeks since her son, Riley Kuznia, was tragically killed on New Year’s Day.
Lance Cpl. Kuznia, of Karlstad, had been on duty at Marine Barracks Washington D.C. when another marine’s gun discharged and the bullet struck him.
Markelle gave the eulogy at her son’s funeral on Saturday, Jan. 12. Riley’s family, fellow Marines, his 2017 classmates and hockey teammates filled the several front rows. There were many tears in the packed gymnasium at Tri-County School in Karlstad, but there was also laughter as Markelle shared just a few defining moments of Riley’s life.
After reading Gary Paulsen’s “The Hatchet,” Markelle said Riley insisted he would be an outdoorsman, starting with hunting rabbits.
They got up at 1 a.m., drove around the whole county and didn’t encounter a single rabbit until they were three miles from home.
“He said, ‘Mom! Stop the car! There’s a rabbit! It’s a roadkill rabbit, but it’s a rabbit,’” Markelle said to uproarious laughter. “We brought it home, he skinned it on my kitchen table … That was my Riley.”
Riley’s adventures seemed to keep him out at night, especially at the outdoor ice rink in Karlstad. He’d spend hours there with his friends practicing well into the early morning, she said. One morning, Riley came home and abruptly woke Markelle saying, “Mom, get up, we gotta go!” Although it sounded like an emergency, Markelle soon found her son was excited about viewing one of nature’s most spectacular displays. “The northern lights are absolutely gorgeous! We gotta go!”
Markelle said memories like these are priceless. The duo talked as they watched the aurora borealis and drove around the county, once again, during the middle of the night.
When Riley signed up for the Marine Corps, Markelle, Riley and their family spent the next year and a half making as many memories as possible before serving his country.
“He wanted to reach for the stars and he didn’t want to do it alone,” Markelle said. “He wanted everybody to go with him.”
Markelle thanked everyone for their support, from family and friends to the Karlstad community, the state of Minnesota and the whole country.
She urged everyone to make memories and let their children follow their dreams.
“Riley lived a short 20 years, but he had no regrets,” Markelle said. “And had Riley lived 120 years, he would never have had any regrets. And who could ask for more?”

Riley’s Character
In her sermon, Pastor Caitlin Jensen shared the gospel of Jesus’s farewell to his disciples before being arrested and crucified. In that tumultuous time, Jesus cared for his disciples by washing their feet and warning them of his impending fate before preparing himself.
“It is so fitting that our gospel today tells us that there is nothing more fitting than to lay down one’s life for one’s friends,” Jensen said.
She said Riley’s character traits of love, care and compassion defined him. He stood up to bullies, spent intentional time with his family, loved the church and gave silent strength to friends and fellow Marines. He always took care of others before himself.
“Jesus gives this commandment of sacrificial love right in the middle of when love was the hardest to give,” Jensen said. “Jesus doesn’t just give this commandment to love and to sacrifice our life for our friends. Jesus lives this commandment.”
Jensen likened Riley’s character to the teachings of this gospel.
“This is the kind of sacrificial life Riley has given to his family, to his community, to his friends, and even to his enemies,” Jensen said. “And this is the kind of sacrificial love that Christ has given to Riley.”
After the funeral, a motorcade took the long route into rural Marshall County to Salem Lutheran Church and cemetery where Riley was laid to rest.
See Riley’s full obituary on page 3 of this edition.