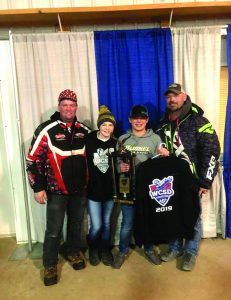 From left, Mike Peterson, Miranda Peterson, Lawrence Eeg, and Stuart Egg celebrate Lawrence’s success during the World Championship Snowmobile Derby. Miranda and Lawrence are teammates and often travel to compete at various snowmobile races. The Petersons are from Lancaster and the Eegs are from Greenbush.

By Anna Jauhola
This weekend didn’t go as planned for 12-year-old Miranda Peterson of Lancaster, but she learned an important lesson while having fun.
“Be cautious of what you’re doing,” she said Monday.
Miranda races snowmobiles and participated in three races over the weekend in the World Championship Snowmobile Derby at Eagle River, Wis., Jan. 18-20.
She ran the Junior Novice 340 and a Kitty Kat race on Saturday, taking third in each qualifying round. However, during the final race of the 340, Miranda crashed.
“I came in too fast,” she said of the first corner. “My back end hit another kid’s front end. I spun into the infield and I tipped over.”
Miranda fell off her sled and suffered only minor bumps and bruises.
Although Saturday was “a little out of the control,” Miranda said the Junior F-500 race went well. She took sixth place out of seven.
“I didn’t take home any trophies, but I had fun,” she said.
This was Miranda’s first experience at the big races at Eagle River. When she turned 12 last year, she reminded her mother, Krystal, that she promised her a trip to the event.
“I asked her a couple years ago when I could go to Eagle River, because I saw the pictures of ice castles and that, and she said, ‘Maybe when you’re 12,’” Miranda said. “Until last weekend we weren’t going.”
The weekend of Jan. 12 brought her good fortune when Miranda did well at races in Glyndon, Minn. Her racing partner, Lawrence Eeg of Greenbush, was already going to Eagle River, so the Petersons said it only made sense that Miranda also compete. She and her dad, Mike, made the eight-hour trip to Wisconsin.
“When I agreed to take her when she turned 12, I did not have a clue she would be going as a racer,” Krystal said. “She was going to be a spectator at that point.”
Miranda’s love of racing snowmobiles started about a year and a half ago, but her family has been racing for years. Her dad, Mike, raced cars and her uncle, Shane, raced snowmobiles. Then Mike and Krystal raced cars and lawnmowers. From there, they went into racing 4-wheelers, or quads as they’re called in the racing world.
Once Miranda and her youngest brother, Carson, showed interest in racing, then Krystal and Mike gave up their circuits and focused on the kids’ events, Krystal said.
Like other racing circuits, Miranda has sponsors who support her. In partnering with Lawrence Eeg, Premier Ag – owned by Stuart Eeg – provides the hauler truck. Danny Lyberg of Lyberg Ranch sponsors her with a trailer. Greg Peterson, Miranda’s grandpa, sponsors her by helping with building and modifications. Choko, a Canadian company, provides her with winter gear. These are just a few examples of the many people who support her.
Miranda said she loves the adrenaline rush and challenge of racing snowmobiles. Even though she’s small, she finds her groove and how best to control the machines.
“It is a dangerous sport, but it’s organized,” Krystal said. “They’re all going the same direction, but it’s the high rate of speed that makes me nervous.”
The Eagle River event was no exception in making Krystal nervous. The track for the F-500 event was extremely banked, making it more dangerous. This did not deter Miranda. She simply said her plan was to get up on the banks to smoother portions and work her way around the track. On the banks, she said she’d be able to hold her corners better.
Although the strategy didn’t gain her a high ranking, Miranda felt pretty good about her performance in the race and that the trip to Eagle River was worth the experience.
Miranda’s racing season isn’t over yet. She plans to be racing through March, with the last race being in Canada.