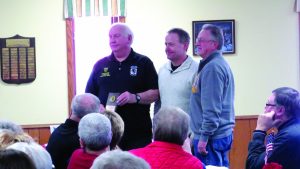 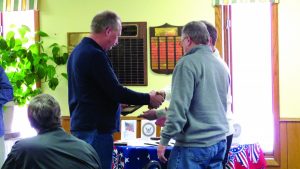 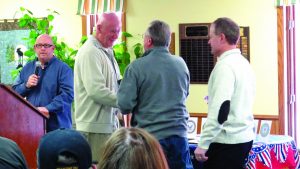 By Anna Jauhola
KARLSTAD – A good-sized crowd filled the Karlstad Senior Citizen and Community Center Saturday afternoon to honor the city’s veterans who have received Purple Hearts.
Karlstad has officially been named a Purple Heart City after city, county and other officials worked together to file paperwork to obtain the designation.
“It’s a very special day for us here,” said Mayor Dale Nelson. “By taking this action, the city of Karlstad pays tribute to the city’s sons and daughters who were wounded or killed in combat by the enemies of the United States of America.”
Saturday’s ceremony honored nine men who were wounded in the line of duty. They are: Adam Anderson, Everett Englund, Randy Krantz, Richard Lubarski, Barry Lund, Brian Sjodin, Douglas Thompson, Neil Wikstrom and Kenneth Gorsuch, all of whom are members of the Karlstad American Legion Post 445.
Three of these men attended the ceremony and publicly received their plaques – Randy Krantz, Douglas Thompson and Everett Englund. After receiving their plaques, Nelson also asked the audience to recognize the veterans’ wives.
Council member Michael Wade spoke briefly, noting the Karlstad community’s recent loss of Lance Cpl. Riley Kuznia. “I hope we always continue to say his name and keep him alive, and say his name with a sense of pride,” Wade said.
He said as with Kuznia’s funeral, the Karlstad community always shows respect and honor for all its veterans. He gave the example of the community taking donations when Krantz was wounded in Vietnam so his family could travel to visit him in the hospital.
Rep. Dan Fabian spoke during the ceremony, and former Rep. LeRoy Stumpf spoke on behalf of U.S. Congressman Colin Peterson, thanking officials and volunteers for making the Purple Heart designation happen. Wade read a statement from U.S. Sen. Amy Klobuchar, who apologized for not being able to attend.
Jean Walker, president of the Department of Minnesota American Legion Auxiliary, Lynn Carr, president of 9th District American Legion Auxiliary, and Commander Arlo Rude from 9th District American Legion also spoke briefly.
“Thank you to each one of the people we are recognizing today, not just because of your service but because you said ‘I will’ when you knew the outcome from saying those words could be a life-changing moment,” Wade said.
Signs similar to those hung up around the county will be placed in Karlstad stating “Welcome to our Purple Heart Community.”