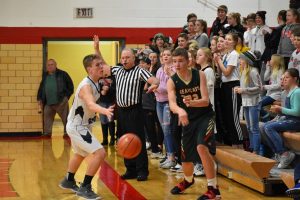 Above, KALEB WHITLOCK passes the ball into play from the sidelines during the Feb. 5 game against Badger/Greenbush-Middle River.
(Photos courtesy of Tina Turn)

By Josie Steen
The Bearcats boys basketball team won two of three games this past week. They beat BGMR in Hallock 80-71, beat Warren-Alvarado-Oslo in Hallock 59-42, and lost a tough matchup versus Red Lake County on Super Saturday 38-54.
In an exciting conference matchup Feb. 5 versus Badger/Greenbush-Middle River, the Bearcats ended up winning 80-71. The first half was fairly back and forth, with the Gators taking an eight-point lead in the middle before the Bearcats fought back to take a 35-30 lead at halftime.
The second half was once again a close race, with the Bearcats gaining some momentum around 10 minutes with a 3-pointer from Kujava, free throw from Whitlock, and a spinning layup by Vig.
With just under three minutes left, the Gators took the lead, but free throws by Docken put the Bearcats up one and helped to accelerate to an 11-point win. Dylan Heggedal led the Gators with 20 points including four 3-pointers as well as nine rebounds. Jarrett Kujava helped the Bearcats win with 34 points and 10 rebounds, with Mitchell Docken adding 19 points and 10 rebounds. Kaleb Whitlock scored 13, Zach Vig contributed 7, Tucker Nelson added 5, and Judah Westerberg also gained two points for the Bearcats.
The Bearcats carried that momentum into their home game versus the Warren-Alvarado-Oslo Ponies, where they won 59-42 in order to complete a five game winning streak. The Bearcats started this game strong, with a 9-0 lead started by an “And 1” play from both Docken and Vig.
The Bearcats finished the first half strongly as well, ending with 37-23 lead. Throughout the second half the Bearcats were able to maintain the lead, finishing 59-42.
Brandon Miller scored 21 of the Ponies’ 42 points, leading their team. Jarrett Kujava led the Bearcats in scoring with 23 points as well as 10 rebounds. Mitchell Docken was next on the team with 15 points, 8 rebounds, and 4 assists. Maurice Sele also added 9 points, Tucker Nelson contributed 5 points and 6 assists, Zach Vig gained 5 points, and Evan Austad scored 2 as well.
The Bearcats were able to shoot high percentages on all of their shot choices, which led them to the 17 point win.
During the annual Super Saturday game, the Bearcats played a difficult conference matchup against Red Lake County, losing 54-38.
The Rebels starting strong, holding an 18 point lead with three minutes left in the first half, before the Bearcats fought back to bring it within 11 points at halftime.
The second half, starting 30-19, remained at about the same point difference the rest of the game.
The second half score was close at 24-19, but the Bearcats were not able to overcome the difference from the first half.
The Bearcats shot a lower percentage than most games, not including their 79 percent on free throws, which ultimately was the downfall, along with the Rebels shooting a fairly high percentage.
Peterson led Red Lake County with 25 points and 7 rebounds, with Olson also contributing 17. Jarrett Kujava led the Bearcats with 16 points and 8 rebounds. Mitchell Docken also scored 8, Zach Vig had 6, Tucker Nelson and Maurice Sele both added 3, and Cade Langen contributed two. Travis Rich also had a rebound and Evan Austad earned two assists.
This week the Bearcats boys will be playing Tuesday in Hallock against the Warroad Warriors and Friday at Fertile in a double header with the Bearcats girls team.