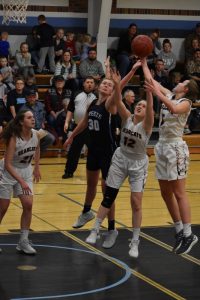 Above left, CORA KUJAVA drives the ball to the net during the game against the Northern Freeze.

Right, Morgan Olson and Marlee Turn both go for the rebound.       (Photos courtesy of Tina Turn)

By Mark Johnson
KCC 63 – Northern Freeze 53
The Bearcats season is rapidly coming to its conclusion in a few weeks and playoffs are just around the corner.  The snow events during the past week postponed one game and cancelled another practice for KCC, but when the weather finally decided to cooperate on Friday, the Bearcats headed south on Highway 59 to take on the Northern Freeze in Karlstad.
The two teams played an overtime contest earlier in the year that the Bearcats won on a buzzer beating 3 point shot at the end of the overtime period.  Friday’s game would have the same feel early in the game, but the latter stages belonged to the Bearcats.  The Freeze and KCC stayed tightly bunched through the majority of the first half of play.  It wasn’t until midway through the opening half that the Bearcats took the lead and slowly started to build a lead.  KCC hit a buzzer beater shot from the top of the free throw lane to take a 32-26 lead into the locker-room.
The Bearcats took control in the second half of play and quickly pushed their lead out to double digits.  It would remain a double-digit lead for most of the remainder of the second half with only momentary dips into the single digit category.  KCC’s defense kept the Freeze offense in check and made it difficult for them to get quality looks at the basket.  The Bearcat offense on the other end of the floor kept converting on enough opportunities of their own to keep the double-digit lead safe down the stretch.
Scoring leaders:  Morgan Olson 17, Andi Strege 17, Cora Kujava 17, Allie Cassels and Gracie Whitlock 4 each, Shelby Pankratz and McKenna Peterson 2 each.
Rebound leaders: Kujava 8, Andi Strege and Cassels 4 each.
Assist leaders: Kujava 6, Marlee Turn 5
KCC 60 – RLCC 39
The Bearcats returned to the hardwood less than 24 hours after their win over the Freeze to face the RLCC Mustangs in a game that was rescheduled due to the blizzard earlier in the week.
KCC trailed early in the game after the Mustangs scored on their first few possessions.  The Bearcats settled in, however, and reeled in their opponent and took an 11-10 lead halfway through the first half of play.
Despite RLCC making a few mini runs, KCC would never trail again in the contest.  The Bearcats held a 23-18 advantage at the end of the first half.
The second half belonged to KCC.  The Bearcats outscored the Mustangs 37-21 to pull away and claim a convincing 60-39 win.  The home team made it very difficult for RLLC to find a way to get back in the game.  The Bearcats defense kept hands in the passing lanes and created a lot of tipped balls and bad decisions.  KCC kept attacking the basket on the offensive end of the floor and were rewarded with successful possessions.
The Bearcats shot 51 percent from the field for the game and close to 70 percent from the free throw line.  The offensive efficiency coupled with the solid defense kept KCC in control of the game for the entire second half.  The win is the fourth in a row for the Bearcats and moved their season record to 14-7.
Scoring leaders:  Andi Strege 21, Cora Kujava 10, Morgan Olson and Marlee Turn 6 each, Allie Cassels and Josie Steen 5 each, Gracie Whitlock 4, and Shelby Pankratz 3.
Rebound leaders: Kujava 8, Strege and Whitlock 6 each.
Assist leaders:  Marlee Turn 5, Olson and Steen 4 each.