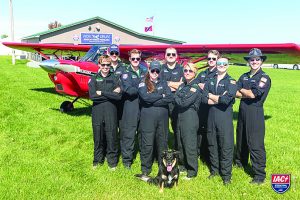 By Anna Jauhola
Alex Hunt can’t imagine a life without flying.
The 2012 Kittson Central graduate took his first flight with Maurice Sugden as a young child.
“I remember it clearly when the door flipped down when we were low and slow. That was exhilarating,” Hunt said.
His also flew with Jim Younggren and Bill Sugden at the Hallock Airport through the Young Eagles program, which helps get kids interested in flying.
The flight that cemented his drive to be a pilot was with John Fowler, one week before he began pilot training.
“That really secured my desire to want to start my flying career,” he said.
When he graduated and began school at University of North Dakota in Grand Forks, Hunt knew he wanted his pilot’s license. After enrolling for a minor in aviation, Hunt earned his private pilot’s license and discovered the UND Aerobatic Team.
“It all snowballed on me after that,” he said. “I kinda got bit by the aviation bug.”
He switched his business management major for aviation management and supply chain management. He trained hard with instructors, now has three different ratings as a certified flight instructor and is looking forward to a career as a commercial pilot.
However, his side-love is the aerobatics team, a collegiate program structured within the UND Aerospace department.
After completing private pilot training, Hunt took Introduction to Aerobatics and found the prospect exhilarating.
“I remember the first time I went up vividly,” Hunt said. “I was nervous because it’s the first time I had to wear a parachute to fly in an aircraft.”
He took the controls and flew upside down for the first time.
When they landed, he was a bit queasy, but otherwise he has never been sick while doing aerobatics.
“Being upside down for the first time is a large adrenaline rush,” he said. “It’s a rollercoaster you control for about an hour. It’s pretty amazing.”
He has participated in several of competitions throughout the nation, he said, including in Illinois, Iowa, Colorado and Wisconsin.
“We fly a sequence or series of loops, rolls, spins, all within a certain order and judged by a panel of at least three judges that looks at how accurate you fly each maneuver,” he said.
Throughout the off season, the team practices on campus with the school-owned plane, which has paid off in huge dividends. The team recently took home its 10th Collegiate National Championship in 11 seasons, during which Hunt was captain of the team. He hopes after graduation and into his career he can invest in a plane with some teammates and compete in aerobatics on the side.
Hunt, who is in his senior year at UND, plans to apply and work for regional airlines over the next several years to see how he likes it.
Then he either will plan to stick with commercial flying, or he’ll take his management degrees and pilot’s license back to the farm in Hallock.
Should he come home and help manage the farm, Hunt believes his aerial experience will come in handy, at the very least, for winter income.
“I’d look at opportunities to fly corporate aircraft over the winter,” he said. “I really do like the Hallock area and I really enjoyed life growing up on a farm. I’d like to come back at some point, but I’d find a way I can do both farming and flying.”