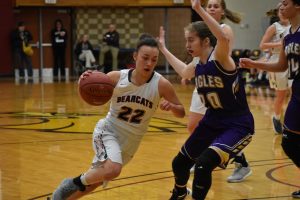 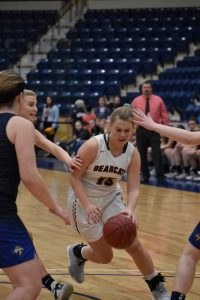 By Mark Johnson
West Sub-Section Quarterfinal
KCC 72
Sacred Heart 65
The Bearcats faced the Sacred Heart Eagles in the quarter final round of the West Sub-Section 8A Tournament last Thursday night in Crookston on the UMC campus. KCC was the No. 5 seed, while Sacred Heart was the No. 4 seed.
The opening moments of the game did not go well for the Bearcats. Sacred Heart came out firing and jumped out to an 11-0 lead in the first 2:30 of the game. The Bearcats trimmed the lead briefly, before the Eagles pushed it back up to as much as 16 points during the first half of play. Fortunately, the Bearcats managed to fight back a bit and closed the Eagles lead to 32-21; the original lead KCC spotted the Eagles to start the game.
The second half was not going the Bearcats’ way either, as the Eagles pushed their lead back to 17 points at 45-28 with 9:22 left to play in the game. It was at that point that the Bearcats summoned the energy and started to mount a comeback. KCC outscored the Eagles 31-14 over the final 9:22 and forced the game to overtime. The Bearcats kept the momentum in their favor during the overtime period outscoring the Eagles 13-6 and headed home with a thrilling 72-65 opening round playoff win.
“The girls deserve a tremendous amount of credit for not giving up on each other. They fed off each other and found a way to get back in the game and put the pressure on the shoulders of the Eagles. The energy that came from the crowd as the comeback started helped provide the little extra boost that the Bearcats needed to finalize the comeback and get the improbable win. It was a great moment for the whole team and the fans.”
Scoring leaders: Cora Kujava 26, Andi Strege 17, Allie Cassels 9, Josie Steen 8, Morgan Olson and Marlee Turn 4 each, McKenna Peterson 3 and Shelby Pankratz 1.
Rebound leaders: Kujava 9, Pankratz 8, Cassels 7 and Olson 6.
Assist leaders: Turn and Kujava 6 each.
West Sub-Section
Semi Final
KCC 31 –
Stephen-Argyle 49
KCC headed to Thief River Falls last Saturday to play the No. 1 seed, the Stephen-Argyle Storm in the semi final round of the sub section tournament. The teams had played twice during the regular season. The Storm won the first contest 54-48 and the second matchup 59-46.
The Bearcats came in with the intention of slowing down the Storm transition game and making it a half court contest. It did not go according to plan early in the game. The Storm raced out to a 17-2 lead on the Bearcats and never looked back. The Bearcats would cut into the lead a few times but the Storm would find an answer and never let KCC get a major run started. The loss ended the Bearcat season with a 17-10 record.
Scoring leaders: Kujava 11, Cassels 6, Strege 5, Steen 3, Turn, Olson and Pankratz added 2 a piece.
Rebound leaders: Turn 7, Cassels 6 and Olson 5.
Assist leaders: Olson and Kujava 3 each.