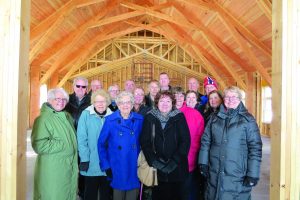 By Anna Jauhola
On Sunday, the Skjeberg Lutheran Church bell rang for the first time since the original church burned down on March 4, 2018. The bell sits in its new steel tower atop the sanctuary.
The church, which had been built by Norwegian settlers in 1883, was struck by lightning during a spring storm. The new building is fully enclosed now and members of the congregation met in the gathering hall on Sunday to hold a short service of remembrance.
Before starting the service, head usher Tom Britten rang the bell as congregation members took pictures and filmed the historic event.
The gathering hall was heated to about 60 degrees, but the coffee was hot and the fellowship was warm. The new facility is one level, making it handicapped accessible, and is only 700 square feet larger than the original church, said Kris Heine, president of the congregation.
Although the doors are plywood and the walls aren’t up, Heine said they are still hopeful the church will be completed and ready for worship this summer.
“We’ve been trying to figure out when we can do a dedication service and I think toward the end of April we’ll have a better idea,” Heine said. “We still need to dig a septic tank in to get water hooked up, and we still need to do dirt around the church. So a lot of things we can’t do until the snow goes away.”
During the gathering, Heine shared Scripture from chapter 16 of Matthew when Jesus was talking to Peter about building his church on the rock.
That Scripture not only was Sunday’s teaching during the sermon, but was also a part of Skjeberg’s 75th anniversary celebration.
“So I think it’s neat how this continues to come up,” she said.
The members also sang “Oh That the Lord Would Guide My Ways,” a hymn found among the remains of the church last year. Heine said the organist book was mostly burned but lay open to that hymn.
The page had charred all around, but each word was still clear as day.
“That’s kind of been our theme through this year,” she said. “Considering the walls went up Oct. 28, so in four months it’s been amazing what we’ve accomplished.”
Congregation members shared favorite memories about their time at the church, from their first visit, to family baptisms, to weddings from recent years to many decades ago.
Emotions ran high on Sunday, with some tearing up and sobbing as the pain of losing the old church is still as fresh as last March. However, the congregation was joyous in the rebuilding, thanking God above all for the generosity of various individuals, churches and others for donating furnishings, kitchen supplies, Bibles, hymn books and much more.
The total project cost is estimated at $1M, much of which was covered by insurance money, but Heine said they also used savings and have received many generous donations from around the area, the country and from their mother church in Norway.
Despite that, more donations are needed. The church still has the Skjeberg Fire Recovery Fund set up for donations at KodaBank in Drayton.