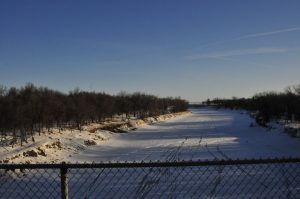 A VIEW OF THE RED RIVER OF THE NORTH between St. Vincent, Minn., and Pembina, N.D. The National Weather Service currently predicts the Red has a 95 percent chance of cresting at 51 feet at this location, which is 2 feet above major flood stage. The levy at St. Vincent is built up to 54 feet, according to town officials. (Enterprise Photo by Anna Jauhola)

By Anna Jauhola
Flooding preparations have become second nature for Kittson County residents and officials.
Although the National Weather Service in Grand Forks said the area has “favorable melt conditions,” the Kittson County Highway Department is beginning to barricade roads and will soon fill sandbags.
“We know per foot what roads are going to go under,” said Shawn Anderson, county maintenance foreman. “We know what to do and when to do it. ”
Since the floods in 1997 and 2009, the county has improved several roads in townships that border the Red River. While those improvements have helped, several roads still go under water including the curve on County Road 7 – a popular backroad taken by locals to the bridge between Robbin and Drayton.
“No one lives by the Red River any more where it floods,” Anderson added. Officials made sure that no one occupied a certain area after those major floods. And those on the very edge of that vicinity who wanted to stay, the county helped build ring dikes around their properties.
Dan Money, manager for the Two River Watershed District, completed water content testing last week at 11 sites in the district, which reaches into Roseau County. Snow depths ranged from 15 to 28 inches with water content between 3.24 and 5.65 inches. He said these levels can cause flooding, but it all depends on the weather. If the thaw/freeze trend continues over an extended period, that does not equate to bad flooding, Money said.
Anderson said last week the private sandpit where the county gets gravel was ready to go and empty sandbags are ready to be filled at the state shop in Hallock.
Hallock’s flood committee will be meeting this week, said Mike Docken, emergency manager for the city. He said as the town prepares for any flooding, their main concerns are pumps on the levees and to ensure gate valves are closed.
“We’ll closely monitor the (Two Rivers) levels and make sure there are no leaks on the dikes,” Docken said.
Officials and volunteers will also keep an eye on the lift stations to keep them in good working order.
Recent forecasts from the National Weather Service in Grand Forks show that the Red River at Drayton has a 50 percent chance of cresting 43.7 feet, above the 42-foot major flood stage.
Even with the improvements done in the last two decades coupled with drought through the last two years, Anderson expects flooding will begin as it always does coming overland.
The snowpack coupled with low land in the county always provide for perfect overland flooding conditions. He expects culverts to be frozen in the middle that will prevent water from moving, but it’s fairly minimal and doesn’t cause washed out roads. However, they keep a watchful eye on the overland water because they can get surprised by ice jams that cause water to rise faster.
“If the road’s frozen, she’ll take the gravel,” Anderson said of the overland water. “If the road starts thawing out, she’ll take out the road.”
Anderson and County Engineer Kelly Bengtson are cautiously optimistic that flooding will not reach 2009 or 2010 levels as the National Weather Service is currently predicting.
“The rivers are low from last fall, so there’s capacity in the channels,” Bengtson said. “I feel there’s going to be some absorption because the channels are so low and the banks are high.”
Should flooding reach the 2009 or 2010 levels, Anderson said 50 miles of county paved and gravel roads will go under water and be closed.
In North Red River Township, where no one lives, pretty much every road will be closed, he added. The county plans to close over 100 miles of road total for safety purposes.
Both Anderson and Bengtson urge the public to not drive around barricades or drive through standing water.
The Red at Pembina is forecasted to crest well above it’s 49-foot major flood stage, with a 95 percent chance of cresting at 51 feet and a 50 percent chance of 53 feet.
The town of St. Vincent met last week to begin its preparations for the coming floodwaters. The crest during the 2009 flood was 52 feet, but those who attended the meeting are old hands at flood control in the town. Officials and residents discussed the need to close a couple culverts on the levy, double check sandbags on hand for stability, obtaining a new six-inch hose and meter for the pumphouse, and tuning up mechanical equipment. They plan to gather volunteers to begin walking the levy in pairs when the river reaches or tops 46 feet. As the river rises, they’ll have a more organized levy-monitoring schedule.
“If we break this down and assign people to different jobs, it will not be overwhelming for any one person,” said Cheryl Phillips, St. Vincent city clerk.
County Emergency Manager Scot Olson attended the meeting to assure them Kittson County is at the town’s disposal should they need sandbags and volunteers. He recommended the town begin recording its flood preparation hours now because they can be used for reimbursement from the Federal Emergency Management Agency. He said it’s likely the county will declare an emergency yet in March.
“What kinds of things should we be documenting?” Phillips asked.
Olson said to document everything from filling sandbags to maintaining equipment to meetings like the one held last Thursday, as well as any money spent to make those preparations.
“I want to do this right for everybody,” Olson said. “The message from emergency management and the state is to watch your hours.”