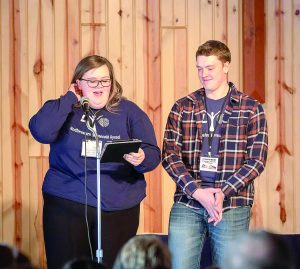 Gus Peterson, right, at the Middle School youth gathering for the Northwestern Minnesota Synod. Peterson helped plan both the middle school and high school gatherings while on the LYO board. Pictured with Peterson is Mira DeGroat, a fellow board member. (Photo Submitted)

By Margie Holmgren
Gus Peterson, Hallock, honed his leadership skills as president of the Lutheran Youth Organization (LYO).
According to the Northwestern Minnesota Synod website, LYO is an organization of high-school age young people who are members of the Evangelical Lutheran Church in America. The LYO is a place where the voices of young people are lifted up in the church. This ministry happens through young people discussing and advocating issues of importance to them concerning faith, youth ministry, the ELCA, local communities and the world.
Peterson, who is a member of Red River Lutheran Church, has been active with his local youth organization throughout his high school years.
In the fall of 2017, after attending the Northwestern Minnesota High School gathering that spring, Peterson applied to be on the board.
“I became interested in the organization after speaking to members of the board,” explained Peterson, “several of which I would serve with for the next two years.”
After completing his application to be on the board, Peterson was required to have an interview with the board’s adult advisers. He was then elected to the board, serving as the Conference One Youth Representative.
Peterson explained that the two major responsibilities of an LYO board member is to plan and execute the middle school and high school youth gatherings that take place every year.
“Our board leads hundreds of youth from northwest Minnesota with four central goals: growing in faith, acting as disciples, lifting voices and providing services to the world,” stated Peterson.
“To be on the LYO board, you must be able to overcome difficult circumstances, which include late nights and early mornings,” added Peterson, “keeping attendees under control and be fully committed to the board.”
According to Kristina Dernier, LYO adviser and gathering coordinator, the board consists of high school students from around the northwestern corner of Minnesota and “caring adults who walk beside them.”
Dernier commented, “My goals as the LYO adviser is to raise leaders, teach life skills – especially problem solving and stress management – and help people grow in their faith.”
In August 2018, Peterson attended the annual summer planning retreat for the LYO board members and was selected as president.
“As president I was tasked with more responsibilities including keeping other board members on task and acting as an outlet to communicate between LYO adults and youth,” explained Peterson.
He stated serving as president was a very rewarding experience.
“I have learned leadership skills that are also applicable to eh rest of my life, Peterson stated, “including on the athletic field and my endeavors through 4-H.”
According to Dernier, “Peterson is an extraordinary young man, who already had fantastic leadership skills, but it was fun to watch him grow and hone those skills even more.”

In addition to growing his leadership skills, Peterson has “developed close relationships with youth from all over northwestern Minnesota, ranging from Roseau all the way down to Alexandria and nearly every town in between.”
Peterson said his best experience on the LYO board was when the local youth group traveled to Houston, Texas for the National Youth Gathering this past summer.
“Our time in Houston had three main days which included interactive learning, service and synod day,” Peterson explained. “When synod day came, our board led over 700 youth and adult leaders from Northwestern Minnesota in fellowship. It was amazing to be able to lead all of those amazing attendants, nearly 50 of which traveled with me from Kittson County.”
“Gus is one of those unique people, who leads people and isn’t afraid to ask for help,” stated Dernier.
“Through being a member of the LYO Board, I have learned exploring my faith is not limited to sitting in a pew on Sunday mornings. In the future, I plan to become a youth leader and bring many more youth down to our synod youth gatherings in the hopes that they will be able to experiences that I have had,” Peterson concluded. “And who knows? Maybe we’ll have a few more LYO Board Presidents from Kittson County in the near future.”