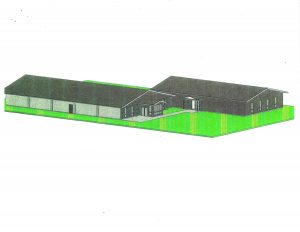 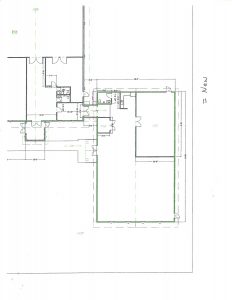 By Anna Jauhola
As the Kittson County Historical Museum continues to receive donations of historical artifacts, the current space is becoming limited.
“We have no room,” said Cindy Adams, museum director, as she addressed the Kittson County Board of Commissioners on Tuesday, April 2. “We are working on putting an addition onto the museum to the west side.”
At a museum board meeting in late March, the members made the decision to move forward with the project, which has been a point of discussion for several years. They handed out spec drawings to the commissioners of a 48×80-foot building from Bakken Construction.
“We got money from the Curtis Miller estate and we put $200,000 aside. We plan to do it in phases,” Adams said. “So, we’re not coming here to ask you for money, we just want your support.”
The museum would often hold events, like the popular Christmas Open House, in what is now the genealogy room. As genealogy research and interest has expanded, there is no longer room to hold any events in that area. The addition will also feature any traveling and interpretive exhibits that include photos and information.
The addition, which will have a bathroom and half-kitchen area, will have an exterior entrance so the public could rent the building for events but the main building would be closed off. A 40×24-foot portion of the southwest corner will be sectioned off for archival storage.
Continued on page 4
“We don’t have a decent storage area right now,” Adams said. “Right now, it’s in the workshop. But we’re doing more work in there and things are getting dusty. It’s not a good place for artifacts.”
The addition, which will be connected to the existing museum by way of Adams’s office, is estimated to cost $323,000. The cost balance will be covered completely by fundraising, Adams said.
Bakken Construction, of Hallock, is set to pour concrete and frame up the walls in August, Adams said. Once the building is up, then the museum would be eligible for various grants through the Legacy Fund, including for lighting and an HVAC system.
“We thought, too, if people see we’re in the process of building it would generate more interest and they would be more apt to contribute,” said Englund.
The commissioners took no action on the matter, but gave their verbal support for the projects. Commissioner Theresia Gillie said she is happy they’re using Miller’s money for such a positive projects. Commissioner Loren Younggren said he thinks the project is great. Commission Chair Leon Olson thanks Adams and Everett for doing a great job with the museum and project.
“History’s being made every day and we do have a rich history here in Kittson County,” Adams said. “I feel we’re a cornerstone county of the state of Minnesota and we’re a strong cornerstone.”