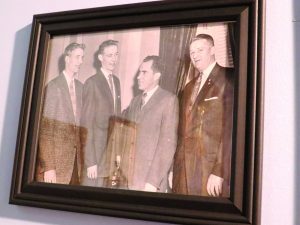 By Anna Jauhola
It started with a desk and the spark of an idea to honor Kittson County’s only politician to serve in the nation’s Legislature.
Odin Langen was civically minded, having served on numerous boards such as South Red River Township, Kennedy School District, and Parents and Teachers Organization. Langen, a farmer from Kennedy, served in the Minnesota House of Representatives from 1950 to 1958. In 1958, he was elected to the U.S. House of Representatives and served until 1970.
His conservative nature and fiscal watchdog mentality certainly helped put him on the map as the kind of leader people wanted.
When Odin left Washington, D.C., he had the option to buy his congressional desk.
“I think it was $50,” said Wayne Langen, Odin’s eldest son, who still resides in Kennedy.
“I know it was very minimal,” said Lois Pagnac, Odin’s daughter, who lives in Stephen. “It was kind of a token.”
The desk migrated from home to home after his death and when the bulky item – sentimental though it was – became too much, his family thought of preserving Odin’s service in the county he so loved.
In 2010, Wayne, Lois and Wayne’s wife, Kathryn Rynning, began the journey of sifting through the more than 20 years of political memorabilia to create an exhibit at the Kittson County Historical Museum in Lake Bronson.
Two other major pieces played a part in creating the exhibit, which has received numerous accolades. Odin’s wife, Lillian, kept about 40 scrapbooks throughout their lives together, starting in the 1930s. The bulk of the scrapbooks cover Odin’s career in politics and are displayed in a trunk in the exhibit. 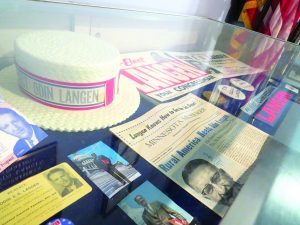 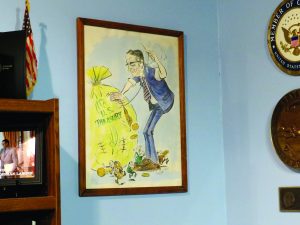