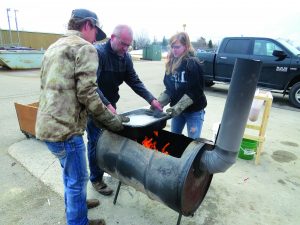 ANDREW HOLM and VANESSA DEBRUIN work with their IT Teacher Ed Lehrke to finish boiling the sap they collected over the last month from area maple trees. The Kittson Central IT class has been collecting sap for four years now.
(Enterprise Photo by Anna Jauhola) 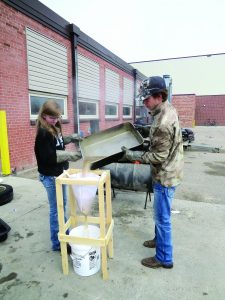 ANDREW HOLM and VANESSA DEBRUIN carefully pour boiling sap into a filter they and their classmates made. The IT class at Kittson Central has been collecting sap to make syrup over the last four years. The batch this year yielded about a half gallon and the students enjoyed the treat poured over vanilla ice cream.
(Enterprise Photo by Anna Jauhola)

By Anna Jauhola
Shiny tin buckets adorn the neighborhood north of Kittson Central School in Hallock. They almost blend into the surroundings if you’re not looking for them.
But these buckets have been hanging from spouts on maple trees since mid-March. Through the industrial technology class at Kittson Central, students tapped trees again this year – with owners’ permssion – and gathered as much sap as possible to make maple syrup.
“This year, we’ll probably yield a half gallon,” said Ed Lehrke, IT teacher.
Up to Wednesday, the class had already collected 20 gallons of sap.
Lehrke started teaching IT four years ago, and that spring of 2016, he brought out his first batch of students to tap trees. His love of the craft began in childhood when his dad tapped between 40 and 45 trees to make syrup. And he saw the opportunity to renew his passion when he became a teacher.
“It’s just something I wanted to do during my teaching career,” he said. “I’ve wanted kids to see and do as much stuff as they can.”
And the students love it. Vanessa DeBruin and Andrew Holm have a particular connection as both their extended families make maple syrup in Wisconsin.
The trick of the trade is to tap trees when temperatures are still below freezing during the day. Shortly after they tapped trees, the freeze/thaw cycle began and the sap began to flow, Lehrke said.
“A good tree, every day, will run the can over,” he said.
This springtime diversion, as Lehrke calls it, hasn’t costed much. He bought the taps for 40 cents a piece and they are reusable. The buckets are all recycled, the woodfired cooker is made from recycled or donated parts, and the wood is all scraps from the IT shop.
In 2017 and 2018, the class, which has included many of the same kids since 2016, wasn’t able to collect much sap. Lehrke said the drought conditions affected the trees.
On Wednesday, April 17, Lehrke’s class made their final sap collection. As they stopped at each bucket, the class reminisced about previous years’ yields.
“We didn’t get a drop last year,” Holm said.

Lehrke added that heavier snowpack with extra moisture seems to help the trees produce, but the last couple of springs have been dry.
“Later sap is never as good quality. It gets cloudy,” he said.
Wednesday brought good end-of-season temperatures so the walk back to Door 17 of the school was pleasant. And the students were excited to strain the sap and add it to the sap already cooking on the class’s homemade sap cooker.
Lehrke said the cooker – basically an old barrel – is made of scrap parts, except the chimney, which he bought with his own money. The woodfired cooker did its job as the sap heated and slowly simmered throughout the afternoon.
“The finishing process is the touchy part,” Lehrke said. “You never turn your back on it. When you’ve finished a batch of syrup, you’ll know when it’s done. You just know the consistency for when it’s ready.”
By the final period of the day, students returned to strain the syrup and pour the warm treat over vanilla ice cream.
“It’s a very long process, but it’s worth it,” Holm said.