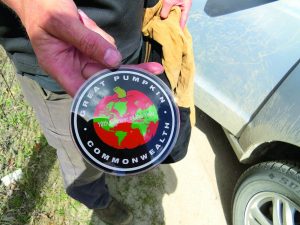 The medal Bernstrom also received as a part of his induction.
(Enterprise Photos by Anna Jauhola)

By Anna Jauhola
The giants are in the ground.
Pumpkins, that is. Charlie Bernstrom hardened off two giant pumpkin seedlings last week and planted them in his 30×60 greenhouse outside Lancaster.
His talent for growing these monsters has garnered him international recognition within the giant pumpkin-growing circle. He was recently inducted into the 5100 Pound Club through the Giant Pumpkin Commonwealth (GPC).
“They have this big show they call for the GPC. It’s kinda nerdy stuff,” he said with a laugh. “This year it was at Lambeau Field. If I could have gone, there was a ceremony where they would have presented me with the jacket.”
For his effort, Bernstrom received an exclusive jacket to commemorate his achievement of growing three pumpkins, the combined weight of which exceeded 5,100 pounds.
In 2018, Bernstrom successfully grew three giant pumpkins, two of which were famously dropped in Lancaster to benefit the Kittson County Literacy Council in October. But, before that, Bernstrom hauled the pumpkins to three competitions – one each to Roland, Manitoba; Anoka, Minn.; and Stillwater, Minn.
To be recognized by the GPC, they must be weighed at GPC-sanctioned weigh-offs such as these, Bernstrom said.
The total weight of his three pumpkins in 2018 was 5,169 pounds.
Although he was unable to attend GPC’s international gathering in Wisconsin, he was able to catch his name being announced. During a curling event in Grand Forks, Bernstrom happened to watch a Facebook Live video of the event and saw his name on the big screen with other growers.
“It was pretty cool,” he said. “When I saw my name on there with other growers … they’re like famous growers that everyone knows. And I don’t consider myself like that.”
Now, every time he competes and logs certain combined pumpkin weights, he can receive a patch to add to his jacket if he qualifies. There are several weight classes between 1,400 pounds and 6,500 pounds.
“It’s such a big sport and hobby, especially when you go further south in Minnesota,” he said.
And Bernstrom has definitely made his mark in the giant pumpkin growing arena.
In 2018, he won first place at both Roland, Manitoba, and in Anoka. He took 10th place at Stillwater with his largest pumpkin. But, he also set the world record for the top-10 average at that weigh-off with 1,920 pounds.
The recognition is pretty exciting in itself, and the hard work pays off. Bernstrom’s prize money basically pays for his hobby. Last year, he estimates he spent $3,000 raising three giant pumpkins. Total, he won $4,500. Plus, after the Anoka weigh-off, his friend who works at Finnegans Brewing Co. in downtown Minneapolis asked to purchase the pumpkin.
“They brewed beer in the 1,600-pounder,” Bernstrom said. “They sell those pumpkins for $1,000 down there, but I just said, ‘Give me a hundred bucks for gas and a case of beer out of it.”
Bernstrom likes to stay low-key, but his recognition in the giant pumpkin world continues to follow him.
“Now I have people asking me questions from all over. They’ll send me emails,” he said.
Over the last six years, Bernstrom has learned a few tricks to the trade, the most important being able to increase efficiency, especially as his family grows.
Usually, he will spend an hour and a half a day tending to the giants. With only two pumpkins this year, it will likely be an hour, but he will also have assistance from his 4-year-old daughter, Briar, who likes to help, he said.
He hopes to make an impression again this year with the two pumpkins he is currently growing. Without giving away too many secrets, Bernstrom gave his recipe for growing giant pumpkins.
“It takes lots of fertilizer and time. And you have to have some luck, too,” he said.