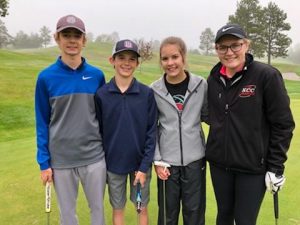 KCC Bearcat golfers, from left, Hayden Hennen, Tyler Hennen, Megan Larson and Aidra Johnson all participated in the Section 8A Golf Tournament in Bemidji. Hayden came home with first place and advances to the state tournament to be held June 11-12. His two-day score at sections was 156. Tyler scored 174 at the tournament, Megan 214 and Aidra 222. (Photo Submitted)

By Coach Diane Younggren
A very long and seemingly endless winter made for a very slow start to the golf season. Indoor practices, inaccessibility to the golf course due to high water and cancelled and reschedule tournaments throughout the beginning of the season made for frustrations as we began. Both the Bearcat teams persevered through the regular season play and ended the season with the Boys’ placing third overall and the Girls’ fourth overall in the Border Conference. In individual play the boys had great success with Hayden Hennen capturing first place medalist at most of the conference meets.
On Tuesday, May 21, the Bearcats returned to Roseau to compete in the North Sub-Section tournament.  The boys did not field a full team this year but did have three golfers compete as individuals. They were Hayden Hennen that was the first place Medalist with a score of 71, Tyler Hennen was fourth overall with an 86 and Andrew Knutson tied for 17th with 100.  Hayden and Tyler advanced to the Section 8A Tournament as individuals.
The Bearcat girls competed as a team at the Subsection tournament. They were Alyssa Wiese (Gr.10) scoring 131, Megan Larson (Gr.9) with a 97, Elizabeth Larson (Gr.10) – 169, Silver Kraska (Gr.8) – 135 and Aidra Johnson (Gr.8) with an 18 hole score of 101. Aidra and Megan both advanced to the Section 8A Tournament as an individual qualifier.
On Tuesday and Wednesday, May 28-29. Aidra, Megan, Hayden and Tyler all traveled to Bemidji to play in the Section 8A Golf Tournament. The weather was perfect golfing conditions with highs in the mid 70s and no wind. This was Aidra’s second trip to the Section tournament and she performed with more confidence behind her game. She posted a day one score of 111 followed by 111 day two for a total of 222. When asked about her experience at the Section Tournament Aidra had this to say, “The Section Tournament was a great experience for me as a young golfer. I got to compete at a higher, more difficult level, which allowed me to notice what I could improve in my own game. I also made new friendships with girls that are also trying to improve their golf game, and learned many helpful things from watching them and spending time with them.”
Megan Larson is new to the Bearcat team this year and this was her first time at Section play. Megan ended day one with a 111 and day two came with an improved score of 103 for a total of 214. Megan summed up her experience this saying, “The Section Tournament really made me notice the improvements that I need to make in the upcoming years. You just need to have a great mindset and think that you can do it, and if you don’t, your scores will show.”
Eighth grader, Tyler Hennen, was making his second appearance at the Section Tournament. On day one, Tyler posted a score of 85. His day two score was an 89, which finished him with a two-day total of 174 and just outside the State Tourney cut line of 171. Tyler shared this about his experience, “This year was my second year going to Sections, so I was playing to qualify for State. I felt like I could’ve played better the second day but overall it was a good experience.”
Hayden was not new to the Section Tournament. He had first played this tournament as a seventh grader and as an eighth grader, had advanced to the State Tournament. Hayden came this year with his sights set high. At the end of day one, Hayden had posted a score of 82 and was in a tie for third place. On day two, Hayden definitely brought his A-game, finishing the round with a 72 for at two day total of 156. At the end of the day, Hayden’s posted score was enough to capture the Section 8A first place medal. Hayden had this to say about the tournament, “This year of golf so far is for sure the best one I’ve had yet and the last day of Sections really topped it off. Everybody in the field shot great and it was fun to see each golfer hitting great shots over and over again. I wish my brother could’ve made it to State with me because he works really hard. I know he will get there next year.” Hayden will represent KCC Bearcats at the State Class A Golf Tournament in Becker, Minn., on June 11-12.