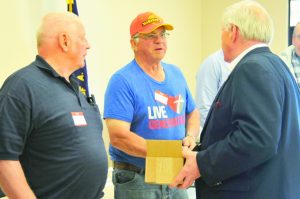 Gerald Karol, Howard Lake, Minn., originally from Lancaster and member of the Lancaster American Legion Club, was one of six who received a Vietnam Veteran recognition pin from Rep.. Collin Peterson.

By Anna Jauhola
Rep. Collin Peterson, DFL-Minn., spoke to a crowd of approximately 30  people about veterans issues at the Lancaster Community Center on Saturday, June 1. The free event was sponsored by AMAC, or Association for Mature American Citizens.
He now serves on the Veterans Committee in the House in addition to his chair position on the Ag Committee. When Congress reorganized this year, Peterson said he asked for a waiver to fill a vacant position on the veterans committee.
“I’ve had a number of meetings, but the No. 1 concern is about the number of suicides happening in the veteran community,” Peterson said. “We need to figure out what to do better in the VA (Veterans Affairs) system.”
He noted that the other group in America that even comes close to the suicide rates of veterans is farmers, which is rising dramatically.
“We’re blessed in this area to have the St. Cloud VA Medical Center. It’s one of the best centers in the U.S. in terms of PTSD and working with vets having mental health issues,” he said. “But that’s not the case all over the country.”
Peterson said the Veterans Committee is also working on the Bluewater Veteran bill to include Vietnam veterans who served on ships within 12 miles of the country during the war. They are not covered medically for having been exposed to chemicals during the war, but many veterans are now experiencing those same issues as those who were directly exposed to chemicals like Agent Orange while serving on the mainland.
Peterson touted his work on getting two new veterans homes in Minnesota, which are slated for Bemidji and Montevideo. Neither one has been finalized as congress has yet to decide which homes throughout the U.S. will be funded this cycle, he said. But he is pushing for at least one to be built this round in Minnesota.
“I’m hoping my being on the committee will give it some clout,” he said. “We’re in what they call Tier 1. We’re not emergency need, we’re critical need. I haven’t figured out what it’ll take to get this done.”
Peterson mentioned there is a program that has worked for rural Minnesota veterans to allow them to visit their clinic if they reside 40 miles or more from the nearest VA facility. However, that program too has gotten “bogged down in bureaucracy,” Peterson said.
At the end of the program, Peterson asked for all Vietnam Era veterans in attendance to come forward to receive a Vietnam Commemoration Pin. Five men stood for recognition. Peterson said the pins are a partial way to make up for how they were treated when they returned from service.
Peterson also addressed questions from the audience dealing with the difference in hours at the border crossings at Lancaster and Roseau and taxation on Social Security benefits.
The primary issue with the border crossings is that Canada’s side is open until 10 p.m. and the U.S. side is open only until 8 p.m.
Peterson said, despite a meeting earlier this year with the person who oversees those crossings, they have still decided to keep the U.S. side only open until 8 p.m. The Seattle, Wash., Homeland Security office oversees these two border crossings and Peterson said he isn’t sure they understand the round trip distance between Roseau and Pembina.
“Once I get back next week, I’m going to talk to Benny (Thompson) and others to come up with a strategy to change this decision,” Peterson said.
Not only did Lancaster residents thank Peterson for his work on this issue, but a few Manitobans were in attendance and thanked him as well.
Don Davenport, of Otter Tail County, asked Peterson briefly about over-taxation of Social Security benefits, explaining that since he’s retired, he has paid thousands of dollars on his benefits and goes to the Social Security Trust Fund and Federal Care Trust Fund. When he retired, Davenport said he was paying 12 percent out of his Social Security benefits for Medicare.
“Most people don’t have a clue. They just get their taxes and sign it,” Davenport said. “There’s half the people on Social Security that pay this tax.”
Peterson said he isn’t aware of this tax, but said after congress passed the unified budget, those items go into one fund. He admitted he wasn’t totally informed on the issue, but said he’d look into it and learn more.
One question addressed a bill in the House that would require transgender/transsexual bathrooms. Peterson said he had concerns about that bill, but he voted for it because, “If I don’t do things like that, the farmers wouldn’t have a farm program.”
He said should the bill get anywhere in the Senate, which it hasn’t, then they’d work it out.