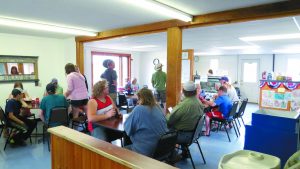 A LARGE GROUP OF PEOPLE, both visitors and area residents, gathered at Bronson City for lunch on Saturday, June 22. The local attraction officially reopened on Wednesday, June 12. It features the mini-golf course, a deli, consignment shop and bike rental. (Enterprise Photo by Anna Jauhola)

By Anna Jauhola
Lake Bronson’s one stop between town and the state park is back up and running.
The often referred to “mini-golf” is now called Bronson City and currently also features a deli, consignment shop and bicycle rentals.
Glenna and Joe Hanson, of Lake Bronson, made the purchase with several of their family members at the beginning of May. Their grandson-in-law, Randall Blacketer, is the spokesperson.
“This place is just too good to sit here,” Blacketer said. “We have so many ideas for it.”
Bronson City officially opened on Wednesday, June 12, just in time for Father’s Day weekend. Blacketer said opening week was a hit.
“I ran out of clubs for golfers on Sunday,” he said with a smile. “We’ll definitely have to get more of those.”
When the family started working on reopening the local attraction, rain kept delaying work on the mini-golf course itself. Despite that, they were able to remove all the obstacles to repaint them and put them back up in time for opening day.
But their biggest concern was to get the main building cleaned on the inside.
“That is going to be our big ticket,” Blacketer said. “(The former owners) left the inside in such good condition. It was just a matter of cleaning it all.”
In the deli, where Blacketer’s mother-in-law, Vickie Toomey, and cousin, Jen Gladrue, make sandwiches, they offer both 6-inch and 12-inch subs, plus wraps and hamburgers. They also offer lunch specials and have found success in busy lunch hours every day they’ve been open so far.
“Everyone loves it,” Blacketer said of the public’s reaction to the entire operation. “We haven’t had one bad review. They love what we’re doing with it. We want people to enjoy their time here. It’s all about the people.”
Their goal is to keep the deli open year round to provide a place for lunch. By the end of the summer, Blacketer said they will also offer a bait shop in the building directly adjacent to the deli, likely offering basic live bait such as minnows, leeches and worms.
Currently, Bronson City is open Wednesday through Sunday, 11 a.m. to 7 p.m. Those hours could change as the word spreads and people start coming in more regularly. Currently, they don’t see customers after 7 p.m., so they chose that as the close time for now.
As they gain their footing with the popular summer traffic, Blacketer said he and the family are constantly hashing out big plans to expand. They bought the venue to ensure some entertainment for residents and visitors alike.
“With the Caribou (Grill) down, that lowers the number of places to eat,” Blacketer said. “No one wants to travel 20-30 miles just to get a simple lunch.”
In the future, the list of improvements and additions to the business is extensive. They plan to build a deck to the rear of the deli building for outdoor dining and relaxing. They will be offering lawn games for rent to set up on the lawn behind the buildings. Eventually, they will install a children’s playset for the younger children who may not be interested in mini-golf.
A fun feature the owners plan to implement is an off-road go-kart track, more than likely in an area near the golf course.
A pond also sits to the rear of the property and Blacketer said they’re debating using that to raise bait or possibly place bumper boats for visitor use in there.
“We have so many ideas,” Blacketer said. “The ideas are constantly getting bounced around. We work on molding all the ideas together.”
For now, Blacketer said they are just happy to have the place open to give residents and visitors something extra to do.
“I know a lot of people grew up with this golf course,” he said. “Bring your family on by. It’s the same course you grew up on. As much fun as you had, your kids will have as much fun, if not more. Come check us out. It’s definitely worth it.” 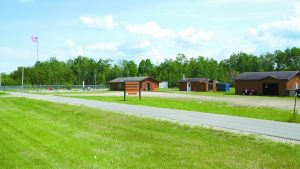 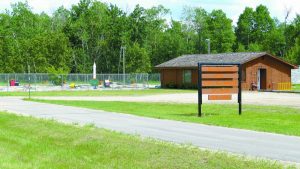 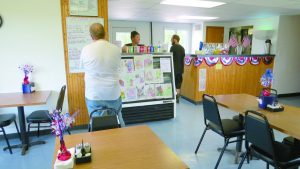 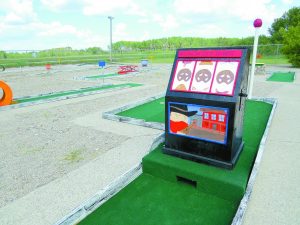