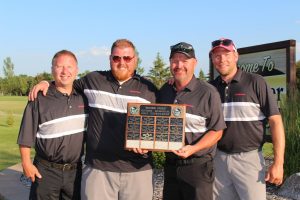 Submitted – The 13th annual “Score Fore” Kittson Memorial Golf Tournament was held on Thursday, July 11, at the Two River Golf Course in Hallock, Minn.
After 5 inches of rain at the beginning of the week, Travis Bogestad, Cameron Mortenson and members of the club had the course in great shape. It was a warm, breezy July day for the 116 golfers who attended the tournament.
Twenty-eight teams registered to golf.
Champions of the 2019 “Score Fore” tournament went to the State Farm team consisting of JP Pearson, Jeff Westberg, Nick Anderson and Ryan Anderson with a score of 58.
Tied for second place was  the Levi Pearson team and the Mike Olsonawski team.
Winners of the second flight was Team PodCo.
The winners of the third flight was the Moore-Bernstrom team.
Out of the 13 year history of the “Score Fore” Kittson Memorial, State Farm has won five times! It must be the great coaching of Bob Carlson!
The funds from this year’s tournament are going to purchase new cardiac rehab equipment.
The Kittson Memorial Foundation and Kittson Memorial Healthcare Center wish to thank all the golfers and donators who made this tournament such a huge success! We couldn’t do it without you. The tournament raised approximately $20,000 in gross revenue.
Items purchased with the proceeds from last year’s “Score Fore” Kittson Memorial Tournament include:
• 2016 used six passenger golf cart from Leisureland RV in EGF – (Seatbelts were installed on the golf cart for resident safety)     $7,320.
• Sunsetter Awning for River’s Edge Assisted Living:  $6,245.
• Ice Machine for upper level – $3,328.24. The used machine was put in the employee dining room for staff use.
Total expenses of items purchased:  $16,893.24
Plans for the 2018 funds had originally included purchasing an outdoor table and chairs to be located on the lower level for residents and guests to use in the summer. The facility received a $2,000 donation from the graduating class of 2018 with the express instructions to use it on outdoor patio furniture so funds from the tournament did not need to go toward this purchase.
Next year’s tournament will be held in Karlstad on Thursday, July 19, 2020! 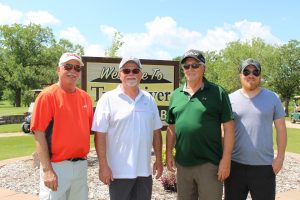 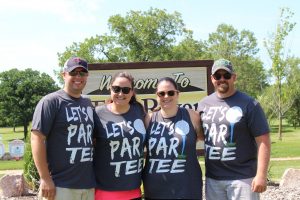