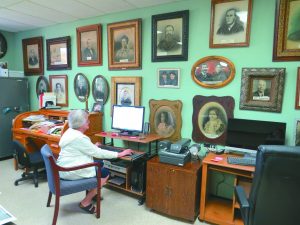 KATHY PEDERSON works on research for a patron by looking through electronic cemetery records kept at the Kittson County Historical Museum in Lake Bronson.

By Anna Jauhola
For two county residents, volunteering to do genealogy research came after they began their own endeavors into family history.
Kathy Pederson and Marcy Johnson are two of the experts who help people delve into their pasts through records at the Kittson County Historical Museum. These two, along with Museum Director Cindy Adams, provide an invaluable service through the research, for which there is no charge. They can access not only local records kept at the museum and in its computer system, but global records through Ancestry.com.
Johnson has worked on computers nearly all her working life, having started as a computer operator at Univac in 1968. Eventually, she worked for the Minnesota Genealogical Society to start a computer database of cemeteries in the state. But her journey into genealogy started when she researched the backgrounds for her and her husband, Neil’s, sides of the family.
She began volunteering her skills for the Kittson County Historical Museum about a decade ago when she began working on the state cemetery index.
“I got to know Cindy (Adams) and that’s when we decided we should have an index here,” Johnson said. “And now, Cindy sends me requests all the time.”
The county museum often receives email, telephone and in-person requests for help researching family histories. If Pederson or Adams are unable to find information at the museum, they refer to Johnson, who has documented nearly 88,000 names of people buried in and around Kittson County.
“Kathy and Cindy are wonderful to work with and for,” Johnson said.
The cemetery indexes are stored on the computers at the museum and Johnson has access to those on her home computer, as she is constantly adding cross-referenced information to the lists.
Each listing contains as much information as Johnson can get including the deceased’s name, date of birth and death, residence, siblings and parents. Johnson obtains most of this information through death certificates she gets through the Minnesota State Historical Society. Each time she is in Minneapolis, she stops there and gets another batch of certificates at her own expense.
“That’s like my fun money – spending money on death certificates,” Johnson said with a laugh. “I just enjoy it.”
When she is asked to help with research, Johnson often refers not only to the museum’s and her own records, but to Ancestry and Findagrave.com.
She also has FamilyTreeMaker, a program she has used to log the families of Kittson County.
But when the museum receives requests for genealogical help, Pederson and Adams are often the first to dive in. Pederson started helping about 10 years ago when she was doing her own family research at the museum. She now is at the museum two days a week to work on requests.
“So, when I was in here doing research and someone was doing something, then I would kind of help them a little bit,” Pederson said. “That’s how it started.”
As time progressed and Ancestry’s databases became more expansive, Pederson worked with the museum’s World Ancestry account and has become a whiz at finding information people request. Although the World Wide Web can be helpful in finding information outside the walls of the museum, the physical records kept there are unique to the county, including church and township records, as well as photos and family histories.
“Cindy uses more of the local records,” Pederson said. “Sometimes, that’s the only place you can find information. So, between the two of us, it usually works out pretty well.”
Adams, Johnson and Pederson agree that when they start any genealogy research, they typically start with a person’s obituary. That usually tells a lot about the person, including date of birth and death, as well as parents, siblings and last residence.
“Then we can track back where they came from and who they’re related to,” Pederson said. “It’s where we can get the most information on anybody.”
After that information is found, the trio can go into any of the systems – cemetery index, Ancestry, Findagrave.com – and search with quite a bit of success.
Adams usually handles the locally kept, physical records of census data and other files, including county and city history books. She often refers to files of newspaper and other clippings, which are cross-referenced to many of the three-ringed binders in the museum.
“If we get stumped here, we go to Marcy,” Pederson said, noting Johnson’s ability to find nearly anything they couldn’t. “In my next life, I’m going to be Marcy.”
Adams said the museum averages at least two requests for research each week year round. Typically, people from out of town will send in requests and visit the museum when they’re in town. But there are some locals who stop at the museum and ask to be pointed in the right direction to do research on their own.
Anyone can stop at the museum and use its subscription to Ancestry to obtain a variety of documents and information regarding their family’s history.
There is no charge for requesting or doing genealogical research through the museum. However, many people will give a donation for the time and/or materials, Pederson said. And in many cases, out-of-towners will become museum members.
“If you’ve lived in Kittson County, it’s a good chance you could come to the museum and print out your family tree,” Johnson said.
Summer hours for the Kittson County Historical Museum are Monday through Friday, 9 a.m. to 5 p.m., and Saturday through Sunday, 1 to 5 p.m.
Email requests can be sent to history@wiktel.com and the phone number is 218-754-4100.