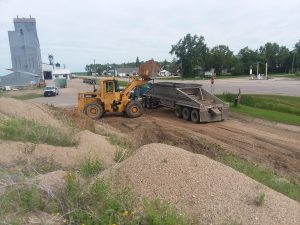 INGEMAN TRUCKING, OF KENNEDY, was contracted by the county highway department to load and haul sand to the road site in Hampden Township, northeast of Northcote. Here, Ingeman Trucking loads sand from the piles in Humboldt.                     (Photo submitted)

By Anna Jauhola
The Kittson County Highway Department is working on a special research project to not only improve dirt roads in the county, but remove eyesores from towns along Highway 75.
Since 2016, there have been huge sand piles in Hallock, Humboldt and Kennedy.
The Burlington Northern Santa Fe railroad was going to use it in a project, but never did and the sand has not been removed. In a recent county commission meeting, County Engineer Kelly Bengtson received permission to sign a contract with the railroad for 3,000 cubic yards of sand at the cost of $1 per yard.
To pay for this project, Bengtson applied for and received a $15,000 Local Operational Research Assistance Program grant through the Minnesota Local Road Research Board.
“The biggest thing was the cost of equipment rental for trucks hauling sand, material costs and loading,” said Lynette Steyn, highway technician.
During the last week of June, Steyn and her crew started the project, which is on a two-mile section of Hampden Township Road 214, one mile northeast of Northcote.
Steyn said they first did a test roll with a tandem truck driving 3 mph to be able to measure the effect.
“We noticed a lot of deflection, which is what we expected,” Steyn said, noting that dirt roads are not the most stable. “The trucks really beat up the road pretty bad.”
The ruts the trucks left behind were deep, leading Steyn and her crew to alter their experiment.
Originally, they were going to use 1 inch of sand on the entire two-mile segment. Intead, they chose to place 1 ½ inches of sand on the first mile of dirt road and 2 inches of sand on the second mile.
They contracted Ingeman Trucking, of Kennedy, to load and haul sand to the site. Once that material was laid on the road, Motor Grader Operator Kelly Lofberg layered out the sand and packed it with the wheel packer attached to his grader.
“He said it was quite interesting trying to get that laid out,” Steyn said.
The sand settled over the weekend and on Tuesday, July 2, Steyn and her crew performed another test roll.
“We noticed the first mile with less material, which was the mile that showed the most deflection before the sand was applied, is where we noticed improvements. It wasn’t quite as bad,” Steyn said. “The second mile was better to begin with. We think we maybe put too much sand on it. It was kind of soft.”
Throughout the summer, the county will monitor the two-mile stretch and track how it does, especially after rain events.
At this point, Steyn said they aren’t sure if the sand improved the road’s strength, but she hopes it can be an improvement for farm implement traffic. They’re looking forward to seeing how it does during harvest.
The research project is estimated to be completed by April 2020, which gives Steyn the ability to monitor how the road fairs in spring traffic as well.
As a part of the grant process, Steyn said they will continue to document everything.
She said, should the project be successful, it is a stepping stone for the county to work with townships which may want to improve similar dirt roads used by farm implements.