By Margie Holmgren
U.S. Sen. Tina Smith visited with area farmers last Tuesday at Far North Spirts.
“What can I do to be helpful?” Smith asked the group assembled.
Local farmer Kelly Erickson answered, “I think one of the things we need as farmers is we need to trade our way out of this. Everybody we talk to and everybody we shake hands with, we need to be trading with them. I think I saw last week we only trade with 6 percent of the world. And that’s just unacceptable for an industry that could feed the world. So the United States Trade Representative (USTR) needs to understand that and I suppose they do understand it to a point but never-the-less the only way we are going to get rid of low prices is if we get these commodities moving and I would just like to hear your perspective on that.”
“I agree with that,” stated Smith, “and I think they do understand it but what disturbs me is the lack of urgency. I think this is a crisis. I really heard it yesterday at Minnesota Wheat. Someone said we need to be patient but one farmer said the bankers aren’t asking if I’m going to be patriotic, they are asking if I’m going to be able to pay my loans. So I agree with you. We need trade – whether it’s commodities or value-added products.”
Smith was asked what is being done behind the scenes.
She explained she feels agriculture is not a Democrat or Republican issue and her colleagues from other states who are big in agriculture are just as or more frustrated than Minnesota.
“Everybody is grappling with how we get the message through,” Smith commented.
She added that with a big election coming up, people are thinking about this and hopefully this will get people to say we need to resolve this.
“I don’t think there was anybody who didn’t think that something had to happen eventually but should it have started four administrations ago, probably,” commented Dan Younggren, Hallock farmer and vice president of the American Sugarbeet Growers Association. “When you are dealing with China (a dictatorship) and they are willing to let people die to win and we are not willing to let that happen – I think what we need to do is start working on a way to compromise.”
“A complete capitulation of your adversary is not a negotiating strategy,” agreed Smith.
Younggren added that the people we will lose are going to be the young people.
“We will burn equity to make sure we stay afloat but it’s our young people who aren’t going to be able to make this work,” Younggren shared, “we need to take care of them to make this industry move forward. Markets are not going to be back overnight.”
County Commissioner and farmer Theresia Gillie stated  “Wheat is $4.25 this morning and I remember when it was $5.25 and we thought it wouldn’t go any lower.”
Smith expressed her frustration by this and explained she was open to any and all ideas to get the farmers’ voices heard.
Erickson stated that the United States-Mexico-Canada Agreement would really help and asked why that is not getting through.
“That is a real opportunity,” stated Smith.
Speaker Nancy Pelosi wants to get it done, Smith wants to vote for it and there is some optimism in that area. But it has not been brought to a vote yet.
Smith explained, “There are issues and questions around making sure that we have a deal that can be enforced.”
There are lots of good things in there but like all bills there are pieces that are mixed in that are not 100 percent related to the bill.
Erickson asked what needs to be done about the immigration issue that seems to be polarizing.
“I totally believe it can be done,” Smith said, “I’m always an optimist.”
She explained her thoughts on this and stated people want a rational common sense solution and she doesn’t feel there is going to be any headway on this until after the next election.
“The bones of a rational immigration policy is there,” she explained, “and truthfully it shouldn’t be this hard to solve. And we need to not use immigration as a way of beating up on each other.”
“The take away from today is an industry of ag in Kittson County is what turns the wheels here – if we as producers do well – everybody in the county does well here,” concluded Younggren. “We want to get our income through the market and not through the government. We need trade. We need some sort of compromise with China and things will start to look up. Until we get that done we are still in a tail spin.”
Kristi Morrison of Morrison Equipment, Inc., Hallock, agreed “This is the preservation of a way of life. It’s been hard but we are still here, but we all need to be able to make a living.”
Smith thanked everyone for coming and sharing their thoughts.
“I will go back and push and do what I can to come to an agreement,” Smith concluded. 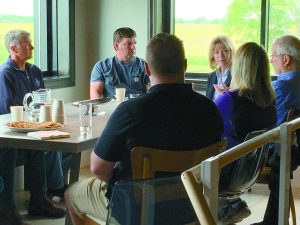