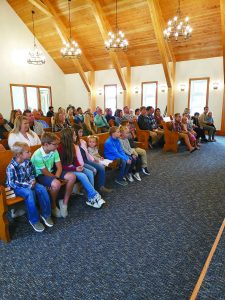 THE PEWS AT SKJEBERG LUTHERAN CHURCH were filled with 90 people who attended the first service held in the new building. The original church, built in 1893, burned to the ground in March 2018 after lightning struck it.
(Submitted photo)

By Anna Jauhola
When Kris Heine became president of the Skjeberg Lutheran Church congregation, she figured it would be a regular term. Perhaps, she thought, she would lead the charge in updating the red carpeting and wood panelling on the walls.
“I thought, ‘What can we do to spruce up the church?’” she said with a light laugh. “Well, God had a different plan for us. He gave us a whole new church. We just really feel that God has been with us the whole entire way.”
The Skjeberg church family held its first service on Sunday, Sept. 8 since the original church, built in 1893 in Teien Township, burned in March 2018. As members walked in that morning, a bouquet of sunflowers and red lilies from the Teien Covenant Church family greeted them, a reminder of how important Skjeberg is within the area community.
The new church, which is 700 square feet larger than the original, is all one level, handicapped accessible and provides abundant gathering space.
When lightning struck the church on March 4, 2018, a fire started and burned it to the ground. From the ashes, the congregation not only found hope but a light toward the future.
A month after the church burned, the congregation voted to rebuild – a nearly unanimous vote, according to Laura Hammond, church member.
“It was important for our active congregation to remain an active congregation,” Hammond said. “We felt that this place was important for the community.”
“And to our heritage as well,” said Heine. “At our anniversary, we had 52 Norwegians that came across the ocean to help us worship … we have this rich history that, had we not rebuilt, we would have lost that, I think.”
Over the last year and a half, many people have practically lived at the church as it was reconstructed. And on the morning of Sunday, Sept. 8, long-time members joyfully notified everyone the church was open once more.
Head Usher Tom Britten rang the church bell in its new tower while Marlys Nelson helped raise the flags at the corner of the cemetery and church parking lot.
When people arrived at the Sept. 8 service, they found two noticeable items recovered from the fire – a metal cross on the altar and the lighted cross now affixed to the east side of the gathering hall. They also heard the bell run again after the service concluded.
“I think it’s just marvelous to have those remnants,” said Nelson. “It’s moving to think we still have three things we were able to salvage.”
The Sept. 8 service brought a full house. Approximately 90 people filled the pews and ushers even brought out a few folding chairs to accommodate everyone.
“I think there were a lot of different emotions,” Hammond said of the service. “We thought it was going to be very emotional and there were moments during it where there were tears of joy. But for the most part, it felt like coming home because so many things were similar.”
She said many members and visitors were “struck by the beauty” of the sanctuary and how its “soaring ceiling” enhanced the whole service.
The congregation will hold a dedication service on Saturday, Oct. 26 with an open house from 1 4 p.m. Heine said they want to invite the public to see the finished product and to recognize those who helped throughout the whole rebuilding process.
“We want to recognize everyone from the firefighters to all who had a piece in rebuilding the church,” Heine said. “We want the public to see what so many of them contributed, because we got donations from all over.”
When area church congregations heard of the devastating fire at Skjeberg, they stepped up and donated what they could. Many of the congregations had churches that had closed and donated items that sat unused in the church buildings. Churches in Sykeston and Lakota, N.D., gave everything needed for the kitchen. The Humboldt Methodist Church gave knives and cutlery as the first gift.
The church in Pleasant Valley, N.D., closed some years ago and the congregation donated its altar, railing, altar chairs, pulpit, baptismal font and hymn board. The pews came from Lankin, N.D., as did the lectern. A church in Osnabrock, N.D., donated several padded chairs for the dining hall and Skjeberg church members donated other padded chairs. And the tables came from other churches. A church in southern Minnesota also donated 100 red hymnals.
“We are so blessed,” Heine said. “There is no way we could have afforded to furnish everything. Without these gifts, we’d have been on old folding chairs to open otherwise.”
As the congregation raises money for smaller projects down the road, they will include historical items from these churches to honor their memories, Heine said.
“We will put in a commemorative plate or mug, or other items, from churches that have donated to us as a part of a permanent display,” she said. “As a remembrance, because for them it’s important to know their church has not died completely. A part of their church exists in us. We want to keep their memories alive.”
On top of all the generous donations from area churches, the active Skjeberg church family will also be working on other fundraisers to move the congregation into the future. Nelson, Heine and Hammond noted the church has many young families excited to be involved and active. The rebuild means so much for those families to continue growing together.
“We’re not doing this for all of us that are 80 years old,” Nelson said. “You’ve got to have a young group that wants to continue this (church). I think they’re feeling that way.”
Hammond, Nelson and Heine all agreed seeing Skjeberg on the skyline along County Road 7 is something exciting. Many people consider the church a landmark and have commented that it’s good to see it.
“To see Skjeberg again, it is just a moving experience,” Nelson said.