By Mark Bernstrom Assistant Coach
The Bearcats went on the road this past Friday to Moorhead to take on Park Christian. There was concern about the weather before the game, but both teams stuck to the plan to have the game at its regular 7 p.m. time. That did not go as planned as a lightning storm rolled through with a tornado warning, which postponed the start of the game for two hours. This was a first for both teams to start the game this late but both sides wanted to get the game in and play football under the portable lights that were set up around the field. This was going to be the first night game for Park Christian at home, as they do not have regular lights to play night games. With the game starting this late there was concern for players to keep a high energy level throughout the game, but the Bearcats showed that they were ready for action.
In the first quarter, KCC stayed true to fashion with playing very tough defense by having Park Christian have a turnover on downs in their first four plays to take the ball over. KCC then took the ball and worked their way down the field and capped it off with a 5-yard pass from Kaleb Whitlock to Mathew Stewart. The 2-point conversion was good with a run by Whitlock to take an early 8-0 lead. After another strong defensive stand to make Park Christian punt, the Bearcats continued to rely on the run game for control. KCC marched all the way down the field to get within the 10-yard line as quarter ended. Then to start the second quarter, Adam Gustafson ran the ball in on a 9-yard run along with a 2-point conversion to extend the lead to 16-0. Park Christian was able to get on the board half-way through the second quarter with a deep pass from Payton Spaeth to Ethan Jorgensen for a 44-yard touchdown. The extra point kick was good and the score was 16-7 going into halftime. In that first half the Bearcats were able to maintain their level of play to control that half and looked forward to do the same the second half.
The second half became a defensive showing by the Bearcats as they started to take over the game. As there were three interceptions as a defensive unit, by Adam Gustafson, Chisum Schmiedeberg and Mitchell Docken. For Schmiedeberg and Docken it was the first interception for their career.
In the fourth quarter, Gustafson iced the game away with a 33-yard touchdown run to cap off an impressive ground game for the night. The 2-point conversion was good, with a pass from Whitlock to Jacob Rice to finish the game 24-7.  The Bearcats played a complete game by controlling the clock with the run game, and a few timely throws to keep the offense rolling. The offense racked up 327 yards, 303 of those yards came on the ground. They also controlled the time of possession by nine minutes, and had 17 first downs compared to Park Christian’s six. The defense kept them to a total of 187 yards and 134 of those were on the ground. A very nice and complete win.
Next game for the Bearcats is at home in Hallock on Friday, Sept. 27 against BGMR. This is the Homecoming game so come on out and visit with past alumni and show your support for all Bearcat activities this week.
Total Yards
KCC 327, PC 187
Offensive leaders
Passing: Kaleb Whitlock- 3/5 att, 24 yds, 1 TD, 1 INT
Receiving: Zach Vig- 1 rec, 17 yds; Matthew Stewart- 1rec, 5 yds, 1TD; Adam Gustafson- 1 rec, 2 yds
Rushing: Adam Gustafson- 28 att, 182 yds, 2 TD; Zach Vig – 8 att, 51 yds; Kaleb Whitlock – 8 att, 41 yds; Daniel Gonzalez – 8 att, 24 yds
Defensive leaders
Interceptions: Adam Gustafson, Mitchell Docken, Chisum Schmiedeberg
Overall performance lead by seniors: Zach Vig, Regan Klein, Matthew Stewart, Cade Langen, Mitchell Docken
Overall performance by underclassmen: Isaac Folland, Jacob Rice, Adam Gustafson, Daniel Gonzalez, Evan Austad, Chisum Schmiedeberg. 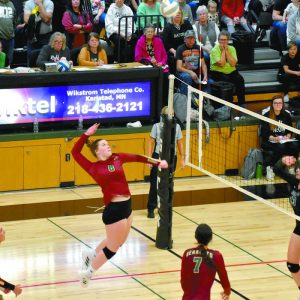