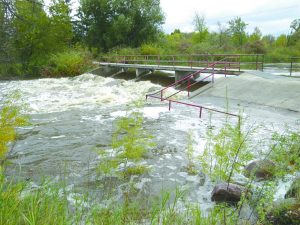 THE TWO RIVERS AT HALLOCK, above left, is well above flood stage with water flowing hard through the dam and its emergency spillway. The above photo was taken Friday and the area has since been blocked off to all traffic until waters recede. The river crested this week at 806.8 feet above sea level.

By Anna Jauhola
The water is running high and fast along the Two Rivers in Kittson County, and it isn’t going to stop any time soon.
After rains drenched the area in late September, the water slowly made its way from the east to fill the Two Rivers to capacity and place Hallock in a flood warning. The Hallock dam has been overflowing since Wednes-day, Oct. 2 and the river crested at moderate flood stage over the weekend at 806.8 feet above sea level.
The Sept. 20 rains that flooded the Roseau and Badger areas are much of what has caused the large amount of water flowing through Kittson County.
“Badger has been flooding for quite some time,” said Dan Money, Two Rivers Watershed District manager. “They had a couple of big rains a little earlier and it takes quite a while for that water to come to us.”
As the soil is so saturated, overland flooding has been a problem. The Two Rivers Watershed District stretches into Roseau County and higher elevations to the north and south funnel overland flooding into the state ditch system and the Two Rivers, which feeds Lake Bronson.
“If you went out there today, you’d have water coming from the Roseau River in the north. You’d have water coming from the Badger area in the east. And you’d have water coming from the south in the Nereson Impoundment area,” Money said. “Someone once described it as a big amoeba. It goes fairly slow because what falls out east takes about 10 days to drain off.”
Due to the high water and heavily saturated soil, the county highway department has barricaded several rural roadways in the eastern portion of the county.
Money said the water flowing through the watershed could take two or three more weeks to fully make its way to the western edge of the county. The landscape from east to west at least provides a transition area around the Roseau and Kittson county lines where the water slows down a little.
As the flows continue to filter into Lake Bronson, state park officials monitor the dam daily. The normal pool level at the lake is 19.35 feet, but earlier last week the lake was at 19.72 feet and had not yet hit its peak, said Jenny Eastvold, Lake Bronson State Park manager.
“We’re still well below spring flood levels, but with the inflow we’re seeing, it’s creeping up to that spring level,” she said.
The Lake Bronson dam has been wide open since the first rain event on Sept. 20 and it has been rushing between 1,000 and 2,000 cubic feet per second (cfs) since Sept. 22. Eastvold said they will continue releasing from the dam for weeks because the soil is so saturated there’s nowhere else for the water to go.
“The dam is undersized for the watershed,” she said. “We can’t discharge at the rate the water comes into the lake. Now we are at the mercy of it catching up.”
Eastvold said the dam is operating properly as it has new actuators, which make the gates rise and fall. However, there is always concern regarding this much water and the age of the dam.
“It’s always held up before,” she said. “But at any given time, that much pressure on the dam is always in the back of our heads. It’s something the citizens downstream should be aware of.”
She added if the area sees 5 more inches of rain on top of the current conditions, “there could be some real problems.” 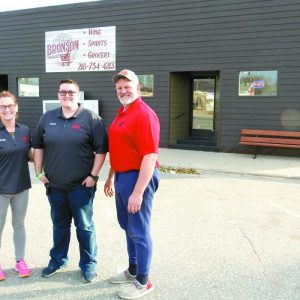