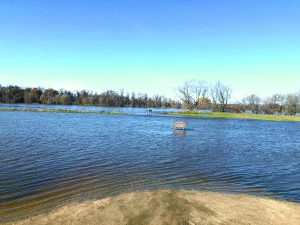 THE HILL TOP BOAT ACCESS point on the Red River northwest of Hallock was just a tad underwater last week. The area will likely remain this way for some time as the National Weather Service in Grand Forks predicts the Red will crest at 40 feet at Drayton and rise to at least 46.5 feet at Pembina.
(Photo submitted by Bill McGovern)

By Anna Jauhola
The Kittson County Board of Commissioners has declared a state of emergency due to fall flooding and extreme soil saturation.
During its regular meeting on Tuesday, Oct. 15, the commission signed a preliminary disaster resolution and heard how the high waters along the Two Rivers and on the Red River are affecting the county.
With continual high flows on the Two Rivers throughout Kittson County, the highway department has been not only closing some roads but has already reinforced one bridge due to scouring.
Keith Klegstad, assistant county engineer, said Ingeman Trucking used fractured field rock to fill in a hole created by the high flood water washing sediment from around the bridge columns on County Road 10 east of Lake Bronson.
“Half of the rock went into the river and you don’t even see it. The other rock went up the bank to divert water around the column,” Klegstad said. “The bad thing with high water like this is we’re not going to see the damage being done until after the water recedes.”
He said as the water continues to flow so high, it hits the bridge and swirls back around, eating at the east bank of the river.
He is not worried about the bridge’s stability, but the county continues to check on it.
“It’s going to be months before we can assess the damage,” said County Engineer Kelly Bengtson.
County Maintenance Foreman Shawn Anderson said the county is holding its own as far as flooding issues, like the scouring. He said his crews need to get more rock in further at the County Road 10 bridge, but can’t until the water goes down.
He is also closely watching the Red River along the western edge of the county. He said all gravel roads in the county are pretty soft, but his crews have closed several roads. The number on the Red River they don’t like is 39 feet, and the river is expected to rise to and crest at 40 feet later this week.
Lake Bronson Dam
Officials were specifically keeping a close eye on the dam at Lake Bronson last week. The emergency action plan was put into place, the county filled sandbags to use if necessary, and the county could close County Road 28, which spans the dam.
The lake reached its peak at 21.48 feet on Tuesday. Wednesday morning, the Minnesota Department of Natural Resources announced the lake level started to decline having gone down to 21.22 feet. As of Monday morning, Oct. 21, the lake had dropped to 19.06 feet. The north and south gates remain fully open on the dam, releasing 1,341 cubic feet per second (cfs). Monday morning, the county also closed County State Aid Highway 16 and Township 67 north of County Road 57 in North Red River Township.
County Emergency Manager Scot Olson reported at the commission meeting that the CodeRed emergency alert system has been tested to ensure it works should the dam fail. He said there are not many people in the flood zone, but they have all been informed regarding current conditions.
In an interview with the Enterprise on Wednesday afternoon, Oct. 16, Lance Crandall, District 1 supervisor for DNR parks and trails, said the lake topped out at 21.48 feet on Tuesday.
By Thursday morning, the lake had dropped to 20.7 feet. The normal pool level is 19.35 feet. Flood stage, where lake water goes over County Road 28, is 23 feet.
“We had a little bit of leeway there,” Crandall said. “But every inch it goes down, that’s less pressure on the dam. There’s less stress, but we’re still on high alert.”
He said they will be closely monitoring the dam throughout the fall and winter due to the highly saturated soils.
“With major snowfall amounts, we could be in for a rough spring,” he said.
Crandall said it may take a few weeks, or even until it freezes, for the lake to get down to its normal pool level as runoff continues to flow from the eastern portion of the Two Rivers Watershed.
In other business:
• Klegstad updated the commission on the annual bridge inspections. He and his crew have completed 26 inspections and reports of the 113 structures they are required to inspect in 2019. There are 201 county and township structures. Two structures have been preliminarily inspected, but crews will complete inspections once there is ice on the river. Thirty structures will need to be inspected for bridge scour because of the high water flows this year.
• The commission approved a mutual aid agreement between Kittson County and the Emerson, Manitoba, community.
• Commission Chair Leon Olson administered the oath of office for the new county assessor, Heather Bruley.
• The commission approved signing a contract with Tri-Valley Bus Service, which offers bus rides to anyone in the area through T.H.E. Bus at $2 a ride. They also designated Social Services Director Kathy Johnson as the authorized representative for Kittson County for T.H.E. Bus program.