By Anna Jauhola
Kittson County’s history shows us this area was once a bustling prairie where businesses popped up literally in the middle of nowhere. Without easy transportation to larger urban centers, pioneers often had to rely on small general stores or even postal stops to obtain the basics.
This Halloween, take time and explore Kittson County’s own ghost towns. They each have a great history and played integral parts in our ancestors’ survival.
ENOK
Perhaps the most beloved and talked-about ghost town in Kittson County is Enok. All that stands of this town is a designation sign on County Road 7 about 6 miles east of Kennedy. The sign stands on the south side of the highway and according to the 1975 county history book, Enok’s combination general store and post office was built in the northeast quarter of section 31 in Jupiter Township in 1893. The store, built by Hans and Esther Hultgren, became a hub of activity and attracted nearby entrepreneurs such as a blacksmith, feed grinding business and creamery. Through the decades of Enok’s existence, the store remained the center of town. The final owners of the store were Oscar Johnson and his sons, Axel and Anton. They operated the business until 1938 when they sold the inventory, building and land.
Now today, the stories are few and far between, but Enok remains on the county map and is even referenced in weathercasts on television. Although the town itself did not withstand the test of time, it certainly left its impression. 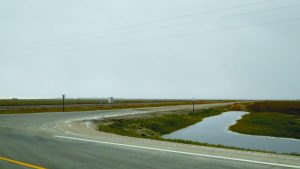 THE VILLAGE OF CHATAM once sat along this intersection of County Road 74 and 220th Street just north of the Hallock Elevator site on the S-curves along Hwy 75.
(Enterprise photo by Anna Jauhola)

CHATAM
A little-known town in Kittson County’s history is Chatam, which was situated near the S-curves on Highway 75 between Hallock and Kennedy. According to Kennedy’s centennial history book, the town was more of a neighborhood and a grain elevator. It was located right along the Great Northern Railroad tracks and County Road 74 on the west side of Highway 75.
The book names Mr. Severin, Otto Peterson, Victor Larson, R. Stewart, Frank Augustson and Olof Johnson as the movers and shakers who really operated the community.
Curiously enough, the book does not list when the community was founded or when it slipped off the map. It does, however, say, “For obvious reasons, Chatam will never be built up as a town, but in all Kittson County, there is no more ideal neighborhood nor one better suited for general farming than the Chatam locality and the lone elevator at Chatam.”
What exactly the “obvious reasons” were, it does not say. Despite that, the small hamlet of Chatam is definitely worth a mention. 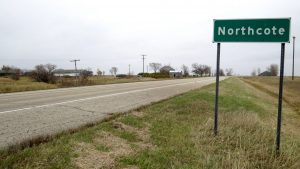 NORTHCOTE was once a thriving community with several businesses.
(Enterprise photo by Anna Jauhola)

NORTHCOTE
Northcote was never incorporated, but probably has the most famous history in the county. Although it thrived on its own for many years with proud citizens supporting businesses, it was boosted in the beginning by the James J. Hill Bonanza Farm to the north of town.
Continued on Back Page
According to the 1975 Kittson County history book, the St. Paul, Minneapolis and Manitoba Railroad Company (later the Great Northern Railroad) filed the townsite of Northcote in December 1880. It developed quickly and at one time had a small department store, two general stores, a hardware store and a lumber yard. The town supported a school, a post office, the Northcote Presbyterian Church, Northcote State Bank and a train depot.
The town also had a hopping social scene with entertainment all year long – “dances, parties, box socials community suppers, I.O.G.T. Lodge affairs, home talent plays, picnics and more,” according to the 1975 history book. Community baseball and basketball team games were a highlight, as was skating on the river nearby. Many of the town’s businesses closed by the 1970s and as farming operations grew larger, the population and business opportunities decreased. As the railroad birthed the town of Northcote, the addition of the Soo Line to the east and improved road transportation sealed its fate. 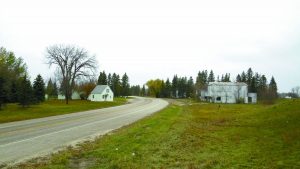 NOYES was once a port of entry to and from Canada. (Enterprise photo by Anna Jauhola)

NOYES
Noyes is still fresh in many residents’ minds as its border crossing closed in the mid-2000s, leaving Minnesotans no choice but to cross at Pembina, N.D., or north of Lancaster. Noyes’ beginning as a customs port started in 1905, according to the 1975 history book. Many people settled around the Noyes location in the early 20th century, but businesses didn’t really take hold until the 1920s. The train depot was the hub of activity for many years as it also served as the customs building. Around 1925, the town had a “restaurant, oil station, a grocery store, post office and dance pavilion.” Apparently, the dance pavilion was extremely popular as it hosted “first-class big bands” and drew visitors from as far away as Minneapolis. Prohibition was in full swing at that point, but liquor and beer were easily obtainable from just across the Canadian border in Emerson, Manitoba, which was also a big draw for visitors.
Perhaps the most notable building the community is the U.S. Customs and Immigration office, which still stands and was built in 1930. The community tried valiantly to keep the port open, but times change and great towns like Noyes must find their places in history. 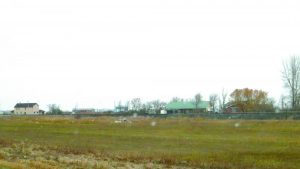 ORLEANS
Here is another town that dwindled due to the Soo Line closing. Orleans was once a thriving prairie town with a school, many businesses and at least four grain elevators. It is noted as “an important trading center” in the 1975 Kittson County history book. At one point, Orleans supported two banks, a lumberyard, a general store, four grain elevators, a hotel, a blacksmith, a creamery, a restaurant and a school.
The history book states that Orleans slowly closed as the Soo Line quit and farms grew larger. The Great Depression closed the banks. One elevator and another building burned down. Many buildings were moved out of town or torn down, including the school and lumberyard.
Some buildings still remain in Orleans today, however some are newer machine sheds and at least one residence. 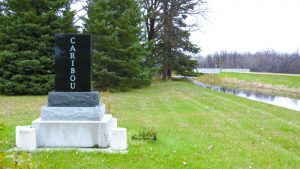 CARIBOU is located in the extreme northeastern corner of Kittson County. This ghost town is marked by this granite stone.
(Enterprise photo by Anna Jauhola)

CARIBOU
The only vestiges of the village of Caribou are a granite marker and the famed St. Nicholas Ukrainian Orthodox Church and cemetery.
Vik Bailey opened the Caribou Store in 1904, according to the 1975 Kittson County history book. Settlers came to the area from Canada and lived in log cabins. They often sold and traded items they needed, like eggs, butter and cream. The store was a popular gathering place with as many as 50 teams parked there to buy, trade and sell items. The people in the area were quite poor, “but had a lot of brawn,” according to the history book. Prior to the store opening, the closest town for settlers to obtain provisions was Hallock. So, the settlers survived on garden produce, wild berries and animals, as well as some crops, such as barley.
Today, those with history in the Caribou vicinity hold tightly to their heritage and proudly maintain the Ukrainian church cemetery, yard and surrounding area. 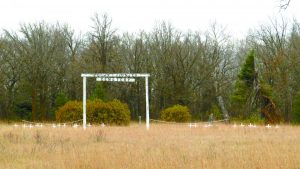 PELAN
The village of Pelan stood on the eastern border of Kittson County on what is now Minnesota Highway 11. All that remains as proof the village existed is the Pelan Pioneer Cemetery, visible to the south of the highway just before entering a cluster of homes along the Two Rivers South Branch. The stagecoach stopped at Pelan, which was described as “the nucleus of the whole territory” at the turn of the 20th century. The stagecoach brought mail and passengers on its way between Stephen and Roseau. Three Pelan residents operated some of the coaches, according to the 1975 history book – Lars Anderson, Billy Peterson and Christ Johnson. American Indians of the Chippewa tribes were seasonal visitors at Pelan as well. They dug up and sold medicinal herbs, such as snake root.
Pelan was important for those who ventured to Kittson County looking to set down claims. A land claim office stood in the village where pioneers could claim homesteads.
The town often held school classes and church services inside a log cabin at Pelan. At one time, the town built a school and church, but they were later moved to other locations. “Fires took their toll and when the village of Pelan was abandoned, the people left,” according to the history book. Although Pelan has disappeared, it remains on the map and in the minds of many who live here. 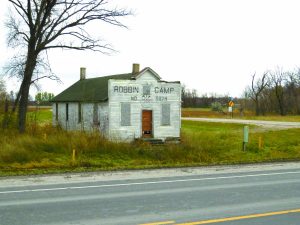 MANY IN THE COUNTY know ROBBIN for its iconic Robbin Camp building.
(Enterprise photo by Anna Jauhola)

ROBBIN
Perhaps the most notable landmark many Kittson County residents can identify as they head west toward North Dakota is the Robbin Camp building. This little shack was the focus of controversy a few years back when the new bridge over the Red River of the North was built. Residents fought to keep the landmark and won. Its presence helps preserve the history of the tiny village. It was founded around 1900 by mostly Scandinavian pioneers. It had a post office, a rural telephone company, a cornet band, a Modern Woodmen Lodge, a grade school, general stores, restaurant, harness shop and two grain elevators. The village also supported a blacksmith, feed grinding mill and carpentry shop.
Many people who lived in Robbin attended the two Teien Township churches that still stand today – Teien Covenant Church and the recently rebuilt Skjeberg Lutheran Church.
Now, the village of Robbin is all but nonexistent due to extensive flooding over the years. However, the history remains and the landmark is one many look for on their journeys home.