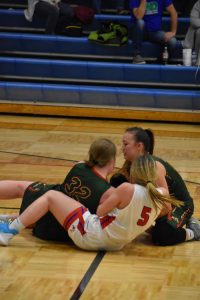 KCC PLAYERS GRACIE WHITLOCK AND SHELBY PANKRATZ scramble for the ball in the game against the Win-E-Mac Patriots at Lancaster on Tuesday, Nov. 28. The Bearcats won the game 50-20.

By Coach Mark Johnson
The Bearcats returned to the court last Tuesday evening as they hosted the Win-E-Mac Patriots in Lancaster. KCC was looking to go into the Thanksgiving break with a solid performance and even their record at 1-1 for the season.
It didn’t take long for the Bearcats to get the ball rolling. They jumped out to an early lead and never looked back. KCC’s defensive effort kept the Patriots in check for the entire first half allowing the visitor only 7 total points in the opening half of play. Offensively, the Bearcats were opportunistic and capitalized on fast break opportunities and second chance points off offensive rebounds. KCC pulled away from their opponent and built a 30-7 halftime lead.
KCC’s defense remained stout in the second half. The Bearcats only allowed 13 points as they continued to make every possession a grind for their opponent. KCC did a good job of limiting easy scoring opportunities and making the Patriots work on every possession. The Bearcats offense sputtered a bit but produced enough to continue to build a lead and coast to a 50-20 win.
The girls were fun to watch. They are always looking for their teammates and do a good job of identifying the open person on each possession. Offensively, we have been very balanced through our first two games of the season. It is difficult to key in on any one player against us, and that will continue to serve us well. Defensively, we have been very solid. We are cutting off the driving lanes and forcing our opponents to play over us instead of inside of us. Whenever you can do that, it makes it tough on your opposition to score on a consistent basis.