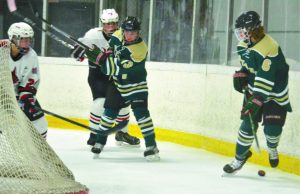 Above, KCC PLAYERS IZYK STREGE, #6, and Morgan Muir, #13, keep the puck away from the Ely Timberwolves. The Bearcats played two games last weekend in Ely and brought home two wins, 9-2 and 9-1. Below, MATTHEW STEWART, #5, takes the puck down the ice against the Ely Timberwolves. (Photos courtesy of Cindy Stewart)