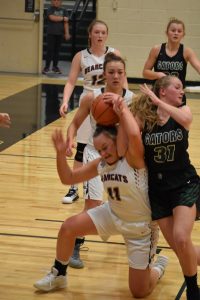 BEARCATS #11 MCKENNA PETERSON grapples for the ball against a Gators opponent during a game at Greenbush on Monday, Dec. 2. (Photo courtesy of KC Media Arts)

By Mark Johnson
KCC 51 – BGMR  54
The Bearcat girls basketball team went on the road for the first time this year last Monday night to face a familiar foe. They rolled into Greenbush to tangle with the Badger-Greenbush/Middle River Gators. The game proved to be tight throughout the entire contest and provided both fan bases with a good night of basketball.
KCC jumped right out of the gate and scored on the opening tip of the contest. They continued to build an advantage and pushed out to a 13-6 lead before the mid-point of the first half of play. The Gators chipped away at the lead and pulled even on a buzzer beater layup as the first half of play came to a close.
The Bearcats and Gators continued to battle in the second half of play. The KCC defense kept the Gator offense from getting quality offensive opportunities through most of the game. In turn, the Gator defense made the Bearcats work hard on every possession to keep the game in check. The Gators built the biggest lead of the game at 41-50, but the Bearcats had a response and closed the gap to 49-51 in the final 30 seconds. They had a chance to tie the game or take the lead, but a turnover forced KCC to foul the Gators and put them on the foul line to eventually seal the win for the Gators.
It was a good game in terms of two teams competing against each on every possession and every second of the game.  Neither one of us was willing to give up anything easy. We can’t ask much more from our players as coaches. When you play another good team, it boils down to making one or two more plays than they do during the game. We came up just short this time, but this group will fight to the end every time they step on the floor.
Scoring leaders:  Marlee Turn and Morgan Olson 10 each, Gracie Whitlock and Josie Steen 9 each, Shelby Pankratz 7, McKenna Peterson 5 and Cheyanne Scalese 1.
Rebound leaders: Turn 10, Whitlock and Pankratz 7 each.
Assist leaders: Turn 6, Steen and Peterson 3 each.
KCC 53 – DVE 32
KCC wasted no time getting back to action and played again Tuesday night at Kittson Central against the Drayton-Valley-Edinburgh Titans. The trick for the Bearcats was trying to duplicate the intensity and focus they played with the night before in Greenbush.
The first half turned out to be a struggle for KCC. The Bearcat defense faced a patient and methodical approach from the Titans and were unable to create easy offensive opportunities as a result of their defense. KCC still had a number of quality offensive chances but the shots in the first half of play were not falling for the home team. The Bearcats limped into the locker room at halftime trailing the Titans 15-20.
DVE notched the first basket of the second  half and held a 22-15 lead. The Bearcats, from that point on,  took over  on the backs of their defense. KCC drained three 3-point shots in a 13-second window to take the lead at 24-22. The ball kept rolling for the Bearcats as the second half of play continued. They coupled defensive stops with aggressive offensive possessions and pulled away from the Titans and claimed the 53-32 win.
We struggled in the first half of play. We weren’t on our toes on the defensive end of the floor and we settled for perimeter shots on offense. It was our defensive energy early in the second half that made the difference. We starting to beat them to lose balls and capitalize on turnovers. We didn’t play a full game, but we did find a way to get back to playing our style in the second half.
Scoring leaders:  Morgan Olson 11, Marlee Turn 10, Josie Steen 9, Gracie Whitlock 8, Shelby Pankratz 6, Cheyanne Scalese 4, McKenna Peterson and Elsa Steen 2 each and Mariah Olson 1.
Rebound leaders: Turn 9, Scalese 7 and Olson 5.
Assist leaders: Steen, Turn and Whitlock 3 a piece.
KCC 61 – GG 51
KCC returned to Lancaster last Thursday night to host the Grygle-Goodridge Chargers. It was the third game in four nights for the Bearcats. They were looking to wrap up the week with a strong performance against the Chargers.
The Bearcats only trailed for a brief moment in the first half of play at 5-6, but it marked the only time in the game the home team did not hold the advantage on the scoreboard. KCC created many quality scoring opportunities in the first half, but were unable to get the finishing shots to drop in the bucket at a consistent rate. They made enough, however, to hold a 24-19 lead at the end of the first half.
KCC had a more productive second half on the offensive end of the floor. They pushed their lead to double digits and it appeared as if they may be able to run away from the Chargers. Grygla-Goodridge didn’t fold though, and stayed in the fight the entire night. The Bearcats aided the Chargers in that effort by sending them to the free throw line 34 times on the night. Those free throws kept the opponent within striking range and forced KCC to keep making plays on the offensive end of the floor. The Bearcats did just that and captured a 61-51 win and moved their season record to 3-2.
The girls stayed aggressive down the stretch and kept attacking on the offensive side of the ball. Unfortunately, we kept giving them chances to stay close in the game because of all the free throw attempts we allowed. We didn’t play a full game, but we did do enough things well to keep the lead throughout the game and finish with a win.
Scoring leaders: Morgan Olson 14, Marlee Turn 13, McKenna Peterson and Shelby Pankratz 8 each, Gracie Whitlock 7, Cheyanne Scalese 6, Mariah Olson 4 and Jenna Davis 1.
Rebound leaders: Whitlock 10, Turn 9 and Peterson 5.
Assist leaders: Turn 9, Pankratz and Jenna Davis 5 each.