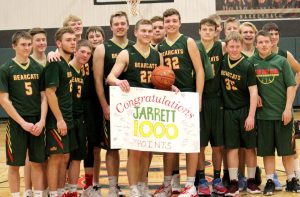 By Josie Steen
The Bearcat boys basketball team won two games to complete the second week of their season, beating the Roseau Rams and Sacred Heart Eagles. Finishing week two at 3-1, the Bearcats handily defeated both opponents this week.
On Tuesday, Dec. 10, the Bearcats played the Roseau Rams in Lancaster, defeating them 61-47.
This game began as a close match-up, tied at 12 at one point early in the game. After this, the Bearcats put on a scoring run, ahead 21-12 before allowing another point. This run showed how the event would end. This distance in points stayed in this area, with the first half ending 33-20, with the Bearcats winning.
The second half continued with KCC stretching the lead, ending up at 50-30 with nine minutes remaining. The Bearcats ended the game with a 14-point lead, winning 61-47.
Jace Hulst led the Rams with 13 points and 5 rebounds.
Jarrett Kujava led the Bearcats in both points and rebounds, tallying 27 points and 17 rebounds. Kaleb Whitlock also added 17 points to the total. Mitchell Docken contributed 8 points, Tucker Nelson added five points and led the team with 6 assists, Chisum Schmiedeberg scored 3 points and Evan Austad collected 1 free throw.
During this game, Jarrett Kujava also reached an impressive milestone, earning his 1,000th point early in the second half. Congratulations to him on all he has accomplished.
Friday, Dec. 13, the Bearcats travelled to East Grand Forks to battle the Sacred Heart Eagles. The Bearcats played well, defeating this competitor 65-46.
Once again this game started as a close match, but the Bearcats made a run halfway through the first half to take a nearly 10-point lead. Eventually this lead developed into the 11 point lead at half time, 31-20.
Early in the second half, the Eagles made a small fight toward the lead, breaking it down to six. The Bearcats quickly turned up their competitiveness, stretching the lead farther than before. KCC led by 17 with 10 minutes remaining in the game. The Bearcats continued down this path, allowing little scoring compared to what they did on offense. The Bearcats finished with a 19-point lead, winning 65-46.
Kobe Tomkinson led Sacred Heart with 30 of their 46 points.
Jarrett Kujava led the Bearcats in scoring with 27 points, but Kaleb Whitlock and Mitchell Docken also passed the 10-point mark with 14 and 11 points. Tucker Nelson came close with 8 points, and Evan Austad and Chisum Schmiedeberg also added 4 points and 1 point, respectively.
The Bearcats won with their highest shooting percentage of the year.
This upcoming week the Bearcats take part in the Holiday Tournament at Northland Community and Technical College in Thief River Falls. They played Fertile-Beltrami on Monday at 6:30, and will also play on Thursday and Friday, with the times and opponents to be determined.