By Anna Jauhola
A Karlstad man plans to apply for a variance on an existing conditional use permit, which would allow him to get a wind turbine blade salvage operation up and running.
Troy Peterson visited with the Kittson County Commission on Tuesday, Dec. 31 during its final meeting of the year. He was going to start breaking down turbine blades on property in Deerwood Township where he has a conditional use permit for a salvage operation. However, having not met the conditions and because the conditions didn’t apply to this new operation, Peterson said he’d like to obtain a variance or a new permit.
“I’m not in a position to break the law, get fines or deal with a court process,” Peterson said. “We have to do this right. I can’t do it any other way.”
County Administrator Eric Christensen said he has three options – comply with the conditions on the current permit, seek a new permit or seek a variance on the current conditions. He spoke with Assistant County Attorney Jeff Hane and found that the commission cannot take action on the issue, only the county zoning board can.
“This is so proper legal notice and a public hearing can be held to protect the rights of the property owners,” Christensen said. “The zoning board can rescind the permit, but the commission cannot. That’s to protect the applicant.”
Peterson had considered moving the operation to land he owns east of Karlstad, which is already zoned commercial, but said at the meeting it wasn’t a viable solution. For the project he will be working on, he said he hired a third-party engineer to help gather data as he moves forward under a Demonstration Research Project permit through the Minnesota Pollution Control Agency.
“I came here to communicate with you guys and want to work with the county and the zoning board,” Peterson said. “I have no intention of doing things the wrong way.”
The board, not being able to take any action on the matter, advised Peterson to visit Zoning Administrator Lane Nordin to get on the zoning board’s agenda and begin the process for a variance or different permit. He said the project will not likely happen until this spring until he is able to get the right permitting.
In other business, the commission:
• Approved applying for a grant to purchase new assistive voting equipment. The current Automark machines are huge, cumbersome and archaic, and require two people to haul them out of the courthouse to each polling place and then back to the courthouse, Christensen said. The state Legislature appropriated $2 million in grant funds during the 2019 session to help update these devices. Christensen proposed the county apply for the grant to replace the Automarks with three tablet-sized assistive voting devices. Each one costs $5,100 and, if the grant is approved, the grant will pay for half of each device. The county has money left over from the Help America Vote grant funds received in 2005 and would use that to pay for the other half of the cost. If the county does not receive the grant, they will not purchase the new machines, Christensen said.
• Approved hiring six permanent part-time sheriff’s deputies to help cover shifts when needed. These deputies are mostly from Marshall County and were hired on a temporary part-time basis earlier in 2019. The board approved rescinding that original temporary hire and instead hired those deputies on a permanent part-time basis. Those deputies are Troy Brekke, Cody Gillund, Benjamin Kucera, Justin McMahon, William Wagner and Mike Docken.
• Approved a year-end transfer from the Ditch Fund into the Revenue Fund of $42,945. The payment for State Ditch 48 of $7,140 and for State Ditch 90 of $19,005 will pay off the balances. After the payment for County Ditch 19 of $9,450, the balance will still be $19,800 in 2020. After the payment for State Ditch 84 of $7,350, there will be a balance of $6,400 in 2020.
• Approved a year-end temporary transfer from the Revenue Fund to the Tax Forfeited fund of $415.26.
• Approved a permanent transfer from the Revenue Fund to the Kittson Health Insurance Fund of $5,326.59.
• Approved the Kittson County Courthouse in Hallock as the designated polling place for the county’s four unorganized townships – McKinley, North Red River, Klondike and Peatland. All residents vote by mail-in ballot, but can also vote at the courthouse.
• Approved sending county department heads and supervisors to a one-day leadership training. The event will cost the county $1,500. Commissioners Loren Younggren, Theresia Gillie and Corey Wikstrom voted in favor while Commissioners Leon Olson and Darrel Johnson voted against.

‘Just stay home’ if you are ill 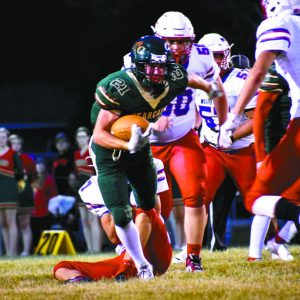