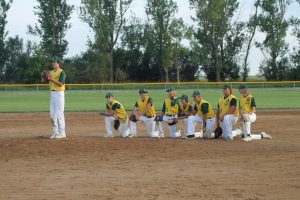 The Legion Post 214 Hornets had a great summer of baseball. They may not have ended with a winning record, but they had a tough schedule and battled tough against every team.  This talented group of athletes showed true tenacity.
The Hornets ended their season Tuesday, Aug. 11 in Crookston, Minn., with a double header.
After holding a big lead most of the first game,  the Hornets lost 8-9.
In that close one, Tyler Hennen was 3-4 with two stolen bases. He scored three runs. Izyk Strege was 2-4 with one stolen base, one run and one RBI.  Calvin Hanson was 2-4 with two stolen bases, three RBIs and one run. This young quick team kept the crowd on their feet but came up just short.
Game two got started just after 9 p.m.  It was a late night, but it was a beautiful night for baseball.
In this one, Hennen was again a leader on the team, batting 2-3, with two stolen bases, one RBI and one run. Hanson helped the team out batting  2-3 with one RBI and two stolen bases. Frank Finney hit 2-3. Strege pitched all five innings. He threw seven strikeouts and had only three earned runs. In the bottom of the fifth, with the score sitting at 5-4, Hennen threw out the tying run from centerfield to catcher Adam Gustafson.  What an ending! The Hornets finished their short, fun season with a victory of 5-4.
The Hornets are sponsored by American Legion Post 214 of Lancaster. They are coached by Reese Steen, who is assisted by Jagger Olson.