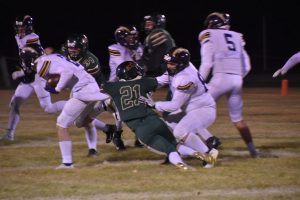 KCC’s Chisum Schmiedeberg, #21, gets a hand on the Stephen-Argyle Storm ball carrier while he pushes off another Storm player. Schmiedeberg had 13 1/2 tackles for the Bearcats in their 20-52 loss to the Storm.
(Submitted Photo)

By Asst. Coach Mark Bernstrom
This past Friday, Nov. 6, the Bearcats hosted the Storm, in Hallock. This was the Bearcats’ first game back since having a two-week postponement in the season. The young Bearcat team was looking forward to the challenge of taking on a seasoned senior Storm team. This game didn’t come without some learning curves, but the character shown in this game showed growth in the young team.
The Storm came out and performed very efficiently as they moved up and down the field in the first half. In the first quarter SAC scored on a 42-yard touchdown and on a 6-yard run to take 13-0 lead going in to the second quarter. It continued the same for the Storm in the second quarter. They scored three times, on three runs within the 5-yard line. The Bearcats did get on the board in the second quarter with a 10-yard run by Chisum Schmiedeberg.  The scored ended up being 33-6 going into halftime.
Going into the second half, the Bearcats looked at building on positive plays to finish the game with more consistent play. The Storm struck again with another run scoring touchdown to extend the lead to 39-6. On the ensuing kickoff, Schmiedeberg took it all the way back on an 80-yard kickoff return. That helped spark some life into the team as they played more physically the rest of the game. The Storm scored again early in the fourth quarter to take a 45-12 lead. The Bearcats put together a long drive with some critical pass plays and gutsy running to bleed the clock down. It was capped off by a 3-yard run by Ozzie Meyer, for his first score of the year. Isaac Folland finished it off with a successful 2-point conversion run to make the score 42-20. The JV was put on the field to finish out the game in the last three minutes. The Storm were able to add one more score for the night to finish out the game 52-20.
This was not the game that KCC players and fans were wanting, but a much better played second half shows the fight that is in this team continuing down the road. The next game will be played Thursday, Nov. 12, against BGMR, for the last regular season game of the year. The Bearcats are looking at a strong showing to finish out this year’s modified regular season.
1st    2nd    3rd    4th    Total
KCC    0    6    6    8        20
SAC     13    20    6    13     52
KCC leaders
Offense
Rushing:
Adam Gustafson
20 att. 133yds
Chisum Schmeideberg
6 att. 17yds 1TD,
Ozzie Meyer
5 att. 12 yds 1TD
Passing:
Braden Faken
6/9att. 54yds
Receiving:
Evan Austad    2 rec. 31 yds
Jacob Rice         2 rec. 20yds  Adam Gustafson
2 rec. 6yds
Chisum Schmiedeberg
80 yard kickoff return
Defense
Ozzie Meyer        16 Tackles
Chisum Schmiedeberg
13.5 Tackles
Isaac Folland        7 Tackles