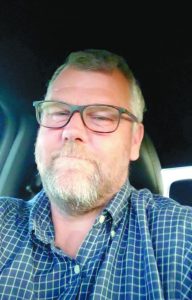 Brian Anderson, 47, of Karlstad, Minn., passed away at Sanford Hospital in Fargo, N.D., on Sunday, Sept.18, 2022.
Brian LeRoy Anderson was born Aug. 4, 1975, in Crookston, Minn., the son of Roger and Bonnie (Patrick) Anderson. Brian grew up in the Halma-Karlstad area and attended Karlstad schools. In his youth, Brian worked at many area farms including the Oscar Carlson Prairie Seed Farm. On June 28, 1996, he was united in marriage to Lisa Amundson at Karlstad. Brian and Lisa lived in Halma for about 10 years before returning to Karlstad. Brian worked at Underdahl Hardware Hank in Karlstad, Digi-Key, as well as the local group home. Brian helped with the beet harvest and enjoyed helping Steve Porter on is deer farm. In December of 2021 he began working as custodian at Lancaster Public School.
Brian was a enthusiastic outdoorsman and enjoyed hunting, fishing, noodling and hog hunting. His children were his pride and joy and he loved spending time with them. Family and friends were everything to Brian.
Family members include his wife, Lisa; children, Hailley Anderson, Neche, N.D., Kaitlin and James, both at home; his father, Roger, Halma, Minn., and brother, Daryl (Marilyn) Anderson, Strandquist, Minn.; nephew, Ryan Overton; and great-niece, Andria Overton.
He was preceded in death by his mother, Bonnie; brother, Jim Linder in 2008; and his mother-in-law and father-in-law, Darlene and Miles Amundson.
Funeral services for Brian will be held on Thursday, Sept. 29, 2022, at 11 a.m. in First Lutheran Church, Karlstad. Visitation will be held at the church for one hour prior to the service. Interment will be in Riverside Cemetery, Lake Bronson, Minn. Rev. Caitlin Jensen, presiding. Casket bearers will be Steve Porter, Nolan Porter, Mike Gunnarson, Brandon Clark, Darin Teie and Darrin Foss.
Austin Funeral Chapel, Hallock, is in charge of arrangements. www.austinfuneralchapel.com.