By Anna Jauhola
As a part of their regular meeting last week, the Kittson County commissioners took a tour of some of the outlying highway department shops and two bridges.
County Engineer Andrea Weleski and Assistant County Engineer Keith Klegstad showed them the oldest shop at Humboldt. The original portion was purchased in 1947 and the addition that houses the motor grader was built in 2000. Last year, they were forced to replace a fuel oil furnace that quit with a propane furnace. Until then, the utility cost for the Humboldt shop cost between $7,000 and $8,000 to heat each winter. This is mainly due to the ancient windows and poor condition of the building.
“There’s no floor heat either,” Weleski said. “Ideally, I would prefer to build a new building and tear this one down. At a minimum, if we don’t do that, these windows need to come out, they are all single-pane.”
Klegstad said they looked at repairs for the building a couple years ago, including replacing the windows and installing steel siding. The cost for materials alone was $8,000. He said that cost would be double, plus labor.
Similarly, the group visited the Kennedy highway shop, which is of steel construction built in 1974. The two-stall structure houses only one motor grader. The problem here is also serious energy consumption and loss comparable to the Humboldt shop before the new furnace.
The shop is not insulated, Klegstad said, except some spray-in material on the ceiling. The walls are a foot thick, which may have been an attempt at one point to improve utility costs, but the windows are in bad condition. The garage doors are original to the building and preferably need to be replaced or at least resealed.
“This would be more of a major renovation,” said Commissioner Loren Younggren. “Just floor heat would make a big difference.”
The group also stopped at the Lancaster highway shop as a good example of an outlying building. It was built in 2001, has automatic LED lights, floor heat and two stalls. The only issues are the garage doors, which are original to the building and should be replaced, and a padlock on the outside of the walk-in door. Klegstad said that will be replaced.
Along the way, the group also looked at a culvert bridge on County Road 55 that needs to be replaced. Klegstad said it is deficient and was originally placed in 1926. Currently, the bridge is two 10-by-4 foot cast-in-place culverts. Weleski said they would replace the bridge with two 10-by-5 foot precast culverts, which should be ordered a year in advance.
Klegstad said the bridge replacement is eligible for bridge bonding money because of its sufficiency rating. The bonding money would cover the bridge itself, digging it out and putting in the new one. The rest will fall to the county.
The group also stopped to look at the newly constructed bridge over the Two Rivers on CSAH 6 west of Lancaster.
Their final stop was at the highway department in Hallock where Weleski and Klegstad told the commission about the need for another stall on the building. The shop was built in 1987 and has three bays where they keep plows, graders and other equipment, and the main bay houses a tractor and is used for repairs. Packed into those three bays are four snow plows, two motor graders and a front loader. This blocks the wash bay, which is particularly necessary during the winter to remove snow and ice each day.
Weleski and Klegstad said an additional bay, with a garage door on the east and west sides, would relieve this congestion. 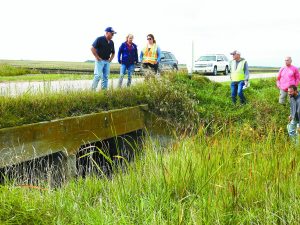 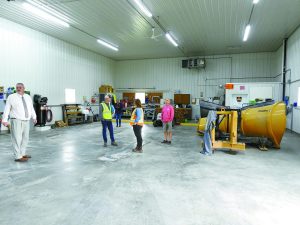 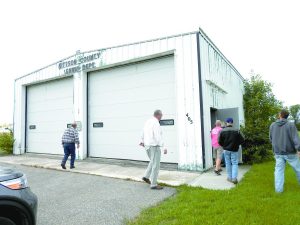