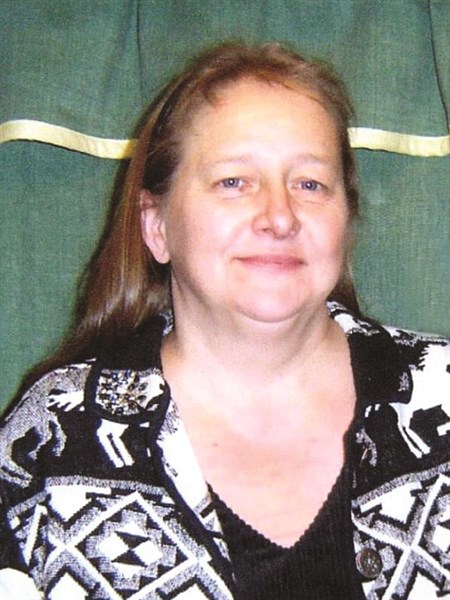 Terry May Steen, 58, Detroit Lakes, Minn. passed away unexpectedly Tues-day, December 22, 2015 at her home.
Terry was born July 11, 1957, to Leonard and Elaine (Westling) Renville in Hallock, Minn.  She was the second born of seven children; five sisters and a  brother. She graduated from Hallock High School in 1975.  She helped her father deliver milk for Renville Dairy in Hallock.  Terry then went on to work at the Hallock Nursing home, where she loved being a cook.
On December 16, 1985, Terry married Bradley Steen in Hallock where they raised their two sons there and in the surrounding area. Terry then worked for the Mileage Café, before they moved to Detroit Lakes in the spring of 1991.  Terry worked for many years in housekeeping at the Best Western Hotel and also at Farnam’s NAPA as a parts delivery person in Detroit Lakes.
Terry loved raising her two sons and would do anything for them.  She enjoyed bowling, making crafts, and doing puzzles.  She also enjoyed playing cribbage and cards.
She is survived by her sons, Marshall Steen,  Vergas, Minn. and Jered Steen, Moorhead, Minn.; her mother, Elaine Renville, Hallock; sisters, Holly (Pat) Taylor, Detroit Lakes, Betty (Terry) St. Yves, Dickinson, N.D.,  Sandy (Randy) Nordstrom, Bathgate, N.D., Shelly (Milt )Rowley, Euclid, Minn., Jody (Charlie) Schmidt, Felton, Minn., and Allen (Kay) Renville,  Evansville, Minn.; along with many aunts, uncles, nieces and nephews.
She is preceded in death by her husband, Bradley; her father, Leonard; her grandparents; and a nephew, Cody.
A memorial service was held Monday, January 4, 2015, 11 a.m. at David Donehower Funeral Home.  A visitation was held one hour prior to the service.
Condolences can be shared at www.daviddonehower.com.